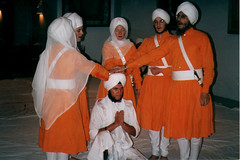 When a Sikh woman or man comes of age, she or he is eligible to join the Khalsa, or the “alliance of the pure.” The rite of initiation is called “taking amrit.” It is expected that sometime within the life of a Sikh he or she will undergo this initiation, and all Sikhs aspire to do so. It is not necessarily for the young, though young people are often inspired to commitment to the Khalsa. As a writer for the American Sikh Review put it, “A Sikh should only take amrit when he is mature enough to realise the nature of the obligations which full membership of the Khalsa demands.”

Today in the U.S., taking amrit is one of the most important ceremonies in the life of a Sikh. The name refers to the drinking of immortal nectar (amrit), an essential part of the ceremony of commitment. The proper name of the rite is khande di pahul, the “nectar of the double-edged sword.” A bowl of water with sugar crystals is stirred with a double edged sword, while sacred hymns are recited, infusing the nectar with the power of the Divine Word. It is this water, which has now become the amrit, that is sipped by those who become members of the Khalsa.

The Khalsa was established by the great Guru Gobind Singh in 1699. According to tradition, Guru Gobind Singh gathered the entire Sikh community on the day of Baisakhi. He stood with sword drawn and asked for five Sikhs who would offer their heads to him. Five devout Sikhs came forward, prepared to make the ultimate sacrifice. From this courageous core, Guru Gobind Singh created the Khalsa, a new Sikh order. He gave them all the name Singh, “lion,” and gave them the five signs of their new identity: the sword, the steel bracelet, the comb, the undershorts, and the uncut hair. Finally, he gave them nectar, amrit, from a common bowl, stirred with his sword. From the time of Guru Gobind Singh on, Sikhs have greeted one another saying, “Waheguru ji ka Khalsa”— “The Khalsa belongs to God”—and responded saying, “Waheguru ji ki Fateh”—“The Victory belongs to God.”

Five Sikhs are required to act as initiators in the rite of taking amrit. They represent the panj piaras, the “five beloved ones” who were the first to come forward and join the Khalsa. They should be observant Khalsa members themselves. Both men and women serve as panj piaras. The first step in the ceremony is to prepare the amrit. One by one, the five beloved ones stir the amrit, each reciting in turn one of the five main prayers. However, all five initiators kneel together around the iron bowl of amrit for the entire recitation, which may take two hours.

Next, each of the initiates comes forward and kneels. Each drinks from the iron bowl and is sprinkled on the hair and eyes with some of the amrit. Each affirms the salutation, “The Khalsa belongs to God! The Victory belongs to God!” One of the five initiators explains the seriousness of taking the step into the Khalsa. From this day forward, they must offer all the daily prayers, from morning to evening, and lead an exemplary life of Sikh discipline. “From this day on, your existence as an ordinary individual has ceased. You are members of the Khalsa. Your religious father is Guru Gobind Singh and Sahib Kaur is your mother. Your common spiritual parentage makes you all brothers and sisters.” The initiates take a new name—Singh for the men and Kaur for the women. Far from being a renunciation of the world, joining the Khalsa is a full-time commitment to a new family of Sikhs.