The Ghadar Party: Freedom for India 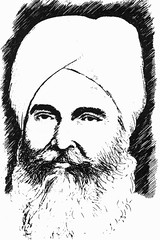 The Ghadar Party: Freedom for India

From a distance, Indians in America were deeply stirred by the progress of the freedom movement in India and the rise of Indian nationalism. In 1912, a Hindustan Association, dedicated to supporting self-rule in India, was formed in Oregon. In California, the Ghadar Movement began, in 1913, as a coalition of expatriate Punjabis dedicated to raising money and support for the overthrow of British rule in India. It was organized and headed by a Punjabi Hindu, Har Dayal, who was at Stanford University. Its early leaders also included two Sikhs and a Muslim and the masthead of its publication bore the names “Ram, Allah, and Nanak.” While the movement’s leadership was, at first, somewhat elitist, the vast majority of the members were California’s rural Sikh farmers.

There is little doubt that the prejudice many Sikhs experienced in America fueled their passion for ending colonial oppression in India. Their exposure to both the ideals of American democracy and the realities of American racial discrimination gave energy to the movement. Then, in 1914, Canadian authorities refused the Japanese steamship Komagata Maru permission to land. The boatload of nearly 300 Punjabis was stranded for weeks in Vancouver harbor. Eventually the ship was forced to return across the Pacific. The incident sent shock waves down the West coast to the California Sikh community.

The Ghadar movement organized to print pamphlets and even to send arms and volunteers for a revolution in India. Some Punjabis returned to India to participate in unsuccessful and misguided revolutionary missions. International Ghadar activity in Germany and elsewhere eventually led to what the press touted as the “Hindu Conspiracy” trial in San Francisco in 1917–18. By this time Har Dayal had already left the U.S. and the shooting of the other major Hindu leader, Ram Chandra, during the trial left the movement almost entirely in Sikh hands.

The arrests, the trial, the shooting, and the deportations all attracted sensational publicity from the American press which heightened suspicion towards Asian Indians. In the 1920s, however, the Ghadar Party was reorganized and it continued as a focal point for Punjabi and Sikh identity until the time of Indian independence in 1947.