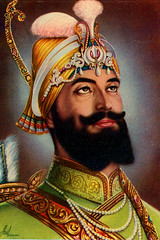 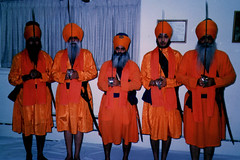 It was on Baisakhi, traditionally an important harvest festival in the Punjab, in 1699 that a new form of the Sikh community was born. Sikhs from around the region had gathered as was their practice on Baisakhi. At Guru Gobind Singh’s request, they gathered in Anandpur, where he had his headquarters.

According to Sikh tradition, Guru Gobind Singh appeared from his tent that day and made a terrifying request. He asked for five Sikhs to offer their heads in sacrifice. People were frightened and silent. But five Sikhs, one after another, responded to his call. Each was led into the tent where the Guru had secretly tethered five goats. And after each of the brave Sikhs had disappeared into the tent, the Guru returned for the next, his sword dripping with the blood of one of the goats. This continued until it seemed that all five men had been slain. Then Guru Gobind Singh did not emerge from the tent for a long time. When he did, he was followed by the five Sikhs, dressed in new garments like the Guru and bearing new swords.

Guru Gobind Singh finally made his intentions clear. He wished to establish a new Sikh order—the Khalsa. The word derives from an Arabic word khalis, meaning “pure.” The Khalsa would be a disciplined body of God’s own saints and soldiers, men and women of courage and dedication who would adhere to the highest codes of conduct and the highest morality. Members of the Khalsa would never flinch in performing their duty to God and their fellow human beings, just as the five Sikhs had willingly offered their lives to the Guru.

The first five members of the Khalsa, called the panj piaras, the “beloved five,” were publicly initiated. They drank from a common bowl the nectar called amrit, prepared and consecrated by stirring sugar crystals into water with a double-edged sword and reciting the words of Guru Nanak’s hymn, the Japji, and some hymns of the other gurus. Then Guru Gobind Singh received many others into the new order of the Khalsa. He instructed them to wear the five distinct symbols of the Khalsa at all times: the kirpan, a small sword; the karha, an iron or steel bracelet; the kachhera, a military form of undershorts; the kangha, a wooden comb worn in the hair, and the kes, uncut hair, covered with a turban. The new initiates were given new names, Singh (“lion”) for men, and Kaur (“princess”) for women. This was a new birth. The khalsis were to consider themselves born in Anandpur, as sons and daughters of Guru Gobind Singh and his wife Sahib Kaur.