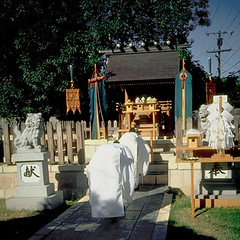 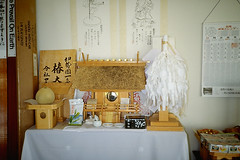 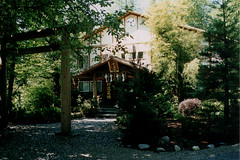 On Alpine Avenue in Stockton, California, not far from the University of the Pacific, is the site of the original Tsubaki America Grand Shrine. While there had long been Shintō shrines on the islands of Hawaii, where many Japanese lived for over a century, this Shintō shrine was the first to have been built in mainland America. In 1992, the priests of the Tsubaki shrine in Stockton conducted a ceremony at Rocky Mountain Dharma Center in Red Feather Lakes, Colorado, to enshrine four kami in a newly constructed Shintō shrine there in the mountains. The priests carried four white-wrapped boxes into the shrine, each symbolizing the spirit of the kami. The principal kami enshrined here is Amaterasu Omikami, the Sun Goddess. That same year, Kannagara Jinja was established by Rev. Koichi Barrish in Granite Falls, Washington. It was here in 2001 that Kannagara Jinja and Tsubaki America merged and became the new home of the Tsubaki Grand Shrine in America.

In the early days, the house on Alpine Avenue in Stockton appeared to be an ordinary suburban home. Inside, however, at the household altar, called a kamidana, the Shintō priest would make daily offerings to the kami. And behind the house, the distinctive torii gateway marked the path toward the Tsubaki Shrine, located in the garden. A sign at the gateway read:

The name of this shrine in the Tsubaki (English translation Camellia) House is Tsubaki America Grand Shrine. It is a branch shrine of Ise District One Shrine, Tsubaki Grand Shrine, located in Japan’s Mie prefecture, 300 miles west of Tokyo. Tsubaki Grand Shrine is one of the oldest Shinto Shrines in Japan, with a 2,000-year history.
Japanese culture is based upon Shinto, and the purpose of the house and garden shrine is to serve as a place of cultural exchange and cooperation. Heart to heart dialog, a harmony that will brighten relations, and the mutual understanding of each other’s culture are among our fundamental objectives.
The five kami enshrined in this garden shrine symbolize this philosophy. They are: the Kami of Pioneering, The Kami of the Sun, The Kami of Harmony, The Kami of the Land of America, and the Kami of Source of Life.

Each part of the wooden garden shrine was sent by boat from Japan and assembled in Stockton. The anniversary of its opening was celebrated every year in the early summer, one of three matsuri (or festivals) held each year. Today, the Grand Shrine in Granite Hills host several matsuri, including the fall and spring festivals.

At the Tsubaki Shrine in Stockton, the occasion of the anniversary ceremony began with a rite of purification, all the offerings and participants were purified by the priest using the harai wand flowing with white paper strips. The priest would bow deeply to the kami, open the door of the shrine, then dedicate food offerings to the kami. He recited the Shintō prayer called norito. The priests and all those present then offer branches of evergreen, called tamagushi. Finally, all the offerings were removed from the shrine and the door once again closed.

Rev. Iwasaki, one of the first priests of the Stockton shrine, underscored the challenge of building shrines for the kami in America. “In Japan, most of the shrines were there when people were born, so the idea to build a Shintō shrine did not occur to the Japanese,” he said. But in America as well there is a spiritual sensitivity to the land, especially among the native peoples and those who cherish the natural environment. “There is something spiritual in places like Yosemite and Tahoe,” he noted. It is this reverence for the spirits that rest and abide in the whole of the natural world that provides the most fertile soil for the appreciation of Shintō in America.

In America, as internationally, there seems to be a special relationship between the Shintō and Unitarian (later, Unitarian Universalist) traditions. In California, that relationship was strengthened through dialogue and exchange between the Tsubaki Shrine and the Starr King Theological School, part of the Graduate Theological Union at Berkeley. A course on Shintō has been taught at the seminary, and students from the seminary are eligible for a Tsubaki Grand Shrine Scholarship which allows them to visit the Grand Shrine in Suzuka, Japan. This is part of a much wider spiritual sharing. Shintō representatives from both Japan and America have attended the Unitarian Universalist Association Assemblies beginning in 1993 in Charlotte, North Carolina. The Reverend Teiji Ochiai conducted a Shintō ceremony for world peace at the Charlotte meeting and provided a workshop for those who wanted to learn more of the Shintō tradition.

It might seem that the Unitarian emphasis on the unity of the Divine and the Shintō appreciation of the myriad kami would find no common ground. A Berkeley student asks just this in a workshop. “If kami are everywhere, why do you need to pray to call them to descend?” The response of the Shintō priest was not theological, but ritual. He said, “If I don’t call the kami, how can I conduct the ceremony? I ask him to here, to this altar. If I didn’t call down, how could I know where to make the offerings?” It is perhaps this locative emphasis, specifying the “where to make the offerings” amidst the vastness and beauty of nature, that balances the universalist vision with a particularist ritual sensibility.