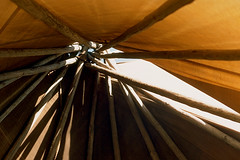 The Native American Church of Jesus Christ is the full name of a widespread spiritual movement that integrates the teachings of Christian life with the spiritual and ethical traditions of various Native cultures regarding the sacramental ingestion of peyote. For some participants, the Christian context is important, but for others the Native American Church is much more an affirmation of Indian religious identity. While the visionary effect of the peyote cactus button has captured the imagination of many psychedelic spiritual seekers, it is critical that those who would understand the ceremonial use of peyote situate this sacramental tradition within the rigorous ethical way of life taught by the Native American Church.

Many church members believe that a narrow perception of peyote as simply an hallucinogen or “drug” informed the U.S. Supreme Court’s 1990 decision in Employment Division of Oregon v. Smith. In the Smith case, two Native Americans had been fired from their state jobs in Oregon because they participated in a peyote ceremony of the Native American Church. Peyote had been listed as a proscribed drug in the state. Because the two men were fired for “drug” use, they were denied unemployment benefits. In a controversial decision, the U.S. Supreme Court ruled in favor of the state of Oregon: those who use peyote ceremonially are subject to the consequences of the state’s “generally applicable law” prohibiting drug use. In effect, the use of peyote was not considered to be a protected practice under the First Amendment guarantee of the “free exercise” of religion. This decision so alarmed protagonists of religious freedom that a wide coalition joined to support the Religious Freedom Restoration Act, passed by Congress in 1993.

The ritual use of peyote has long been practiced in northern Mexico and the extreme southern plains of what is now the United States. In the nineteenth century, it spread widely through the tribes of the Northern plains and the American Southwest as many Native people found a redemptive vision in the peyote ceremonial practice and the teachings surrounding it. In 1918, the peyote movement was incorporated as the Native American Church in an effort to find legal protection against a number of state laws passed against the use of peyote. In some tribal contexts, the growing popularity of peyote rites has generated significant tension with other Native spiritual traditions. Other Native communities find that the Native American Church augments their own spiritual repertory quite naturally.

The peyote ceremonies in the Native American Church take the form of an all-night ritual which often takes place in a tipi, around a fire. The ritual is almost always sponsored by a family or community with special concerns, such as the recovery of a family member from serious illness or the safety of young men serving in the armed services. The ceremony involves singing peyote songs, recounting the body of myths and teachings associated with peyote, passing the drum and the rattle, passing a smoke of tobacco, offering prayers and testimonies, and eating the peyote. After a full night of ceremony, the peyote rite concludes with a community feast, usually prepared by the sponsor.

The visions that may arise in the course of the peyote ceremony are not sought for their own sake, but are searched for the meanings they may hold for healing and guidance in daily life. Many Indians insist that the goal of peyote ceremonies is the feeling of brotherhood and sisterhood they create, the way of life they inspire, rather than the visions. In the Native American Church, peyote and its ceremonial ingestion are considered medicine given by God to lead people to Christ. The principal ethical affirmations of what is sometimes called the Peyote Road include brotherly and sisterly love, the care of family, self-reliance, and the avoidance of all alcohol. Peyote meetings and the life of commitment they call for are often instrumental in helping Native people contend with many personal difficulties, including substance abuse.

Today, the Native American Church, or the Peyote Road, is a loose confederation with an informal network of local meetings. Its spiritual leaders are known as Road Men. The Church recognizes a congruence between the Christian message and the traditional ways of Native communities. Perhaps it is for this reason that the Native American Church has provided many Native people with a powerful spiritual resource for living as Native people in the modern world.