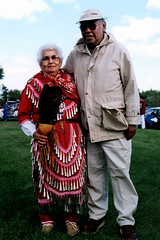 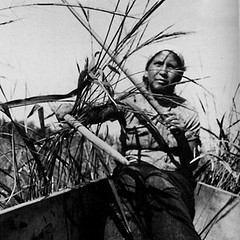 The Ojibwe, also known as Chippewa, refer to themselves in their original language as the Anishinaabe, or “the people.” Numbering more than 100,000 in the United States, the Ojibwe are comprised of networks of independent bands, knit together by a shared language, culture, and traditional clan system, and traditionally inhabiting the Western Great Lakes region of Michigan, Wisconsin, Minnesota, North Dakota, Ontario, and Manitoba. The Anishinaabe are culturally related to other peoples of the Northeast Woodlands and linguistically related to other peoples of the Algonkian language family.

The religious traditions of Ojibwe people vary greatly by community, but all share a profound respect and sensibility for the manidoog (sometimes spelled manitous), the spirits, or “mysteries.” The manidoog are the sources of life and existence, whose power can be accessed through dreams, songs, dances, and other forms of specialized ritual knowledge. As in other Native traditions, these powers are symbolized both by animal spirits and by a more monotheistic Giche Manidoo, “Great Spirit” or “Great Mystery.” The Ojibwe sing, dance, and pray to the spirits for health and prosperity in this life, for a successful hunt, a bountiful harvest of wild rice, a successful career in medical school, or simply to express their respect and gratitude to the sources of life.

A rich body of sacred stories resides in the Ojibwe oral tradition. Particularly in winter, when it is ritually permissible to tell adizookanag, or particularly sacred stories, elders pass on the stories and morals learned from animal spirits and from the first people. And they tell anew the tales of the humorous Trickster, the figure responsible for bringing culture to the people, but who constantly breaks the rules of convention and draws a hearty laugh.

Over the centuries, many Ojibwe people, like those of other Native American communities, have become Christian, but the relationship between their Christian and traditional Ojibwe practice and belief can vary significantly. To be sure some Ojibwe Christians disclaim indigenous Ojibwe religious traditions and some Ojibwe traditionalists disclaim the religion of missionaries. But for many, a principled respect for religious difference promotes a distinctively Ojibwe tolerance, where the boundaries between Christianity and Ojibwe traditions are maintained, out of respect for the distinctive ways. For others still, generations of Ojibwe Christians have creatively indigenized the missionaries’ religion in a manner that fuses Christian practice and belief and core Ojibwe values and beliefs.

Ojibwe religiousness has to do with the stories and ceremonies that make connections between the people and the sources of life. It is also about respecting elders and about ethical commitment to the life of the community. The Ojibwe religious tradition stresses the importance of life-long dedication to the harmony and beauty of bimaadiziwin, the ongoing circular movement of Life.