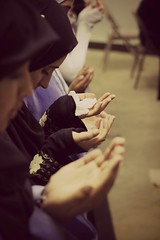 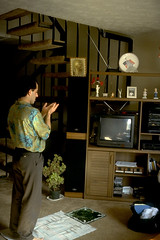 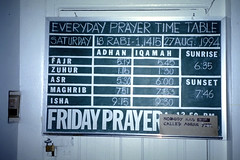 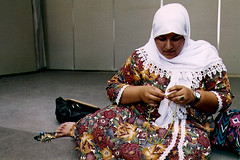 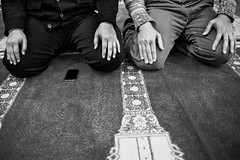 One of the most distinctive aspects of Muslim life is the emphasis on daily ritual prayer. Ritual prayer, called salat, is one of the Five Pillars of Islam; every Muslim above the age of seven is required to perform five daily prayers. The prayers punctuate the whole day: the first prayer takes place before sunrise, followed by a prayer at midday; the third is at mid-afternoon, another after sunset, and the final prayer when the sky grows dark. The salat provides a regular interruption of the day’s activities in order to focus the mind and heart on the first priority of life, service to God.

Muslims prepare for prayer by performing ritual ablutions, called wudu, of hands, mouth, nostrils, face, ears, arms, head and feet and by stating their intention to pray. Facing the qiblah, the direction of Makkah, a worshipper stands to begin the set of formal recited words and movements. The repetition of set words and movements makes the salat a concrete expression of the Muslim’s total physical, mental and spiritual submission to the will of God. Each aspect of the sequence—standing with hands raised, bending forward at the waist, prostrating with toes, knees, hands and forehead on the ground, and sitting on the heels—is accompanied by a formula of praise or recitation from the Qur’an. Salat is performed according to the practice of Prophet Muhammad, who, according to tradition, was taught by the angel Gabriel.

Muslims are called to pray wherever they are, as long as the place is clean; only the Friday Jum’ah prayer must be performed in a masjid or with a community. Today’s Muslims have new technological advances to enable the regular performance of prayer, whether in the masjid, at work, school, or home: DVDs enable new Muslims and children to learn how to pray; computer programs and websites allow Muslims to calculate the proper prayer times; software for the personal computer includes automatic prompt that sounds an audio adhan five times daily, making it easier for Muslims to observe their prayers in the workplace.

Performance of extra prayers is not obligatory, but it is a recommended sign of devotion. Ritual prayer is also not the only kind of prayer in Islam; after salat has been performed, or at any other time, Muslims may sit with uplifted palms and pray a du’a or individual prayer of petition and praise. Sometimes these prayers are preceded by reciting praise formulas thirty-three times, or the 99 Beautiful Names of God, for which a rosary, called a masbaha, is used. Prayer is a central pillar of Muslim life, both for the individual and the larger Muslim community.