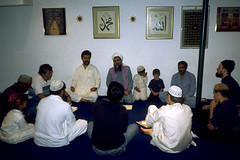 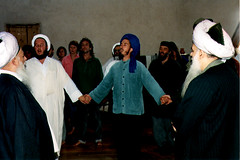 Sufism is often called “the heart of Islam,” as its emphasis on the inner life enlivens and supplements the outward practices of ritual and legal obligation. The early Sufis attempted to follow Muhammad in the direct experience of the Love and Light of God. By the 12th century, the mystical path was systematized by spiritual masters (shaykhs or pirs), whose followers were initiated into orders called tariqahs, worshipping together under the guidance of the master.

The Sufi form of devotional worship known as dhikr (remembrance) usually involves rhythmic chanting of the names of God, sometimes accompanied by poetry, dance, drums or a reed flute. The most well-known form in the West is the muqabalah (encounter) dance of the Mevlevis or “Whirling Dervishes” of Turkey. Inspired by the 13th-century mystical poet Jalal al Din Rumi, the dancers revolve while moving in a circle, symbolizing the return of all creation to the One Creator.

From the Mevlevi order in Vermont and the Bawa Muhaiyaddeen Fellowship in Philadelphia to Masjid Jamil in Palo Alto, California, Sufi Muslims gather today to practice dhikr. Circles of Muslims chant “La ilaha illa’llah,” or, “There is no God but God,” attending to their breath, concentrating their thoughts, and praying to the One. The flexibility and accessibility of Sufism make it remarkably effective in the missionary spread of Islam. Some American “Sufi” groups practice an eclectic form of spirituality and do not consider themselves to be Muslim at all, but Sufism, by definition, cannot exist outside of the discipline of Islam. The blessing and spiritual teaching of the Sufi masters in the United States traces its lineage to the Prophet Muhammad and ultimately to the One God worshipped by all Muslims. Sufi practice and the literature associated with it, the excesses of which are often criticized by reformist Muslims, continue to shape the devotional lives of many American Muslims, even if they have no formal affiliation with a Sufi order.

Many Americans, especially Euro-Americans, have come to embrace Islam through involvement in Sufi devotional practice. Experimentation with “Eastern” religions during the 1960s contributed to the growth of small Sufi orders in the United States. In the 1990s, Sufism has reached out to younger, mainstream American audiences through Nusrat Fateh Ali Khan. Khan, jokingly referred to as the “Pavarotti of Pakistan,” performed qawwali, a form of Sufi devotional music which dates back to the 12th century. Khan packed concert halls throughout North America and Europe with his compelling performances, and in 1995, recorded two duets with Pearl Jam’s Eddie Vedder for the film soundtrack of “Dead Man Walking.” Since his passing away in 1997, other Sufi-influenced musicians have continued to be heard by an American audience. Notably, A.R. Rahman, the famed Indian composer influenced heavily by Sufi musical traditions on the sub-continent, has found a remarkable following in the United States through his collaboration with Andrew Lloyd Webber on the Broadway musical “Bombay Dreams,” and his scoring of the music for the hit film, “Slumdog Millionaire.”