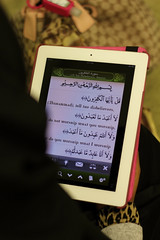 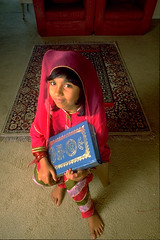 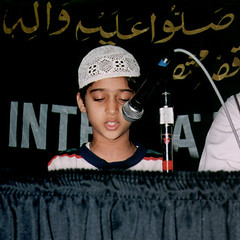 For Muslims, the Qur’an is God’s word spoken as guidance for human life. Muslims believe that God has communicated with human beings through the prophets, beginning with Adam and including Noah, Abraham, Moses, David, and Jesus, among many others. Each time God revealed the same message, but people corrupted or lost that message, straying from the path of moral responsibility, thereby neglecting to worship God. To Moses, David, and Jesus, God gave revelations, but the followers of these prophets failed to protect the revelation from distortion. Mercifully, God revealed the Qur’an to the Prophet Muhammad in clear Arabic as the final and incorruptible word.

Muslims point to the beauty of the language as evidence of the Qur’an’s miraculous origin. The Qur’an may be interpreted in other languages, but it may not be translated and retain the same power; therefore, the true Qur’an is in Arabic. As the Word of God, the Holy Qur’an must be treated with respect: one should perform ablutions, or wudu, before handling the Qur’an, and one should never place the Qur’an on the floor.

The Qur’an is a word to be heard; in fact, the word qur’an means “recitation.” The angel Gabriel commanded Muhammad to recite (iqra’) the words he was given. Before the written verses were collected into the book we now know as the Qur’an, the passages were preserved in the memory of reciters. This practice has been passed down to this day, and around the world, young Muslim children memorize the Qur’an. Professional reciters perform for special occasions, such as festivals and funerals. Strict rules govern the reciters’ pronunciation, and though recitation often involves melody, it is rigidly separated from musical art in both form and intent. To listen to the Qur’an is to experience the presence of God. The text of the Qur’an is divided into 114 surahs, arranged roughly from the longest to the shortest. They include praise, warnings of judgment, exhortations, directives, and occasional short narratives. Every Muslim must learn to recite the opening surah of the Qur’an and some of the shorter ones to perform the ritual prayers properly.

At the Darul-Uloom Al-Madania in upstate New York, a secondary school and Institution of Higher Islamic Education, students can enroll in a three- to four-year course to memorize the Qur’an. Those who complete the program receive hafiz certification, and also study tajwid, the art of Qur’anic recitation. Many students enrolled in the secondary school participate in this program concurrently. The school is located in Buffalo, New York, and is accredited by the New York State Education Department.

Today, one can also learn and hear Qur’anic recitation online, from a variety of different sources. Youtube, in particular, has proven to be an extremely useful medium for transmitting the Qur’an, allowing listeners around the world to hear celebrated recitations by notable figures as the Egyptian singer, Abdel Halim Hafez, and sincere renderings by unnamed followers and students of the Qu’ran.