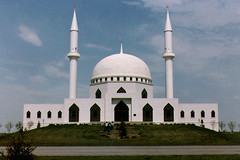 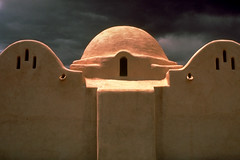 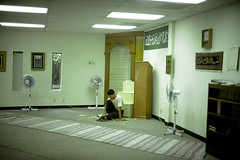 The mosque is called masjid in Arabic, which means “place of prostration,” or the place where Muslims bow in prayer. “Mosque” is a word of French origin, initially used by non-Muslims to describe the Muslim place of worship. This term is now often used by Muslims as well, but the word masjid (plural masajid) is generally preferred. Almost every masjid contains a prayer hall in which there is a mihrab, a niche marking the direction of prayer, and a minbar, or pulpit; outside the prayer hall is a place for ablutions. Many masajid are also adorned with a towering minaret, from which the call to prayer may be sounded. The masjid is the chief architectural expression of Islamic faith and practice, which takes a variety of forms in different historical and cultural contexts.

The prayer hall of an American masjid is most often a walled enclosure with an uncluttered floor, with separate areas for men and women. The mihrab, or prayer niche, is usually a small arched indentation in the wall of the prayer hall that indicates qiblah, the direction of Makkah. The congregation forms parallel lines facing the mihrab when performing the ritual prayer. In many masajid, a small staircase leading to a seat stands to the right of the mihrab. This is called the minbar, from which the imam delivers the Friday khutbah, or sermon. One of the most distinctive aspects of traditional masjid architecture is the minaret, a towering structure from which the muezzin calls the faithful to prayer. These are the fundamental elements of nearly every masjid, though the style of their composition and combination reflect the cultural and artistic diversity of the Muslim communities or individuals who build them.

In the United States, much of this diversity is vividly in evidence: some masajid take the form of simple storefront prayer rooms, others serve as multi-purpose Islamic centers, complete with schools, day-care centers, medical clinics, and offices. Many centers are nondescript, situated in residential or commercial space; others are monumental expressions, built to echo historical and cultural forms associated with traditional masjid architecture. Some stunning examples include the Islamic Center of Greater Toledo, which incorporates distinct Ottoman elements; New Mexico’s spectacular Dar al-Islam, which reflects a Nubian architectural style; and the Islamic Cultural Center of Tempe, Arizona, a small-scale replica of the Dome of the Rock Mosque of Jerusalem.

Many U.S. masajid are located in renovated buildings, often utilizing other houses of worship. Tulsa’s Masjid al-Islam was once a Christian church; Masjid al-Qur’an, in Dorchester, Massachusetts, was formerly a synagogue; a number of urban masajid once served as temples of the Nation of Islam. In New York, a former watch factory serves as an important Shi’i masjid; in Palo Alto and Chicago, movie theaters have been renovated into masajid; other American Muslim communities have taken buildings such as a U-Haul dealership and a Hewlett-Packard training facility, and transformed them into thriving places of worship.