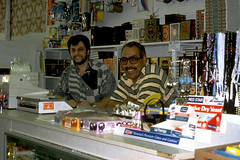 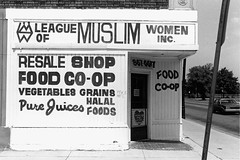 Halal means “permitted” in Arabic; it is the opposite of haram, or “forbidden.” These are key concepts in Islam with many ramifications for the daily life of a Muslim; one of the most visible expressions of these concepts may be found in Islamic dietary rules. Among those Qur’anic injunctions related to the consumption of food is the following:

“O ye who believe! Eat of the good things that We have provided for you. And be grateful to Allah, if it is Him ye worship. He hath only forbidden you dead meat, and blood, and the flesh of swine, and that on which any other name hath been invoked besides that of Allah. But if one is forced by necessity, without willful disobedience, nor transgressing due limits, then is he guiltless. For Allah is Oft-Forgiving Most Merciful.” (Surah 2.172-173, King Fahd trans.)

Accordingly, food items considered haram include pork and beasts of prey; further, the consumption of intoxicants such as alcohol is also haram. Islam prescribes a method by which animals may be slaughtered with minimal suffering. At the time of slaughter, the name of God is pronounced, symbolizing God’s role as creator and provider: such meat is considered halal.

Contemporary Muslim understandings of halal food rules do vary. Some Muslims believe that avoiding pork, pork lard, and alcohol and saying “bismillah” before eating are sufficient for food to be halal. Other Muslims insist on Islamically slaughtered meat and carefully check all product labels for haram ingredients. Other Muslims contend that these proscriptions are not limited to food, and will not wear perfume because of its alcohol content, or use soaps made from lard. In the American context, these proscriptions may be difficult to observe, as many goods contain pork by-products such as lard, or small amounts of alcohol. Numerous Islamic Internet sites post an article from the Muslim Consumer Guide which lists hidden sources of haram food, such as pork lard in the hamburger buns and apple pies served at some fast-food restaurants.

One of the strategies adopted by American Muslims is to eat kosher food, which is marked with a “K” on the packaging. Jewish dietary rules also forbid the consumption of pork and require that the name of God be said at the time of slaughter. Muslim travelers sometimes request kosher meals for their airplane flights; at Harvard University, some Muslim undergraduates take their meals at Hillel House, the Jewish student center. There is an increasing impetus in the Muslim community to educate the larger community about Islamic dietary restrictions and to establish more halal stores and restaurants, as well as to create a halal certification system that would function in a way similar to that used for kosher foods.

In larger U.S. cities with significant Muslim populations, there is a growing network of halal products available, with groceries, catering services, and restaurants offering halal food. The Caltech Muslim Students Association maintains a list of halal restaurants in Southern California, including Thai, Pakistani and Persian; in Texas, the Muslim Yellow Pages lists numerous grocery stores with halal food products and Islamically slaughtered meat; in San Jose, California, one local masjid offers halal pizza by the slice for those attending Jum’ah prayers during their lunch break.

Recently, halal food companies have grown in popularity, with even such mainstream grocery chains as Whole Foods stocking the halal frozen food entrees of “Saffron Road”, a subsidiary brand of the American Halal Company. IFANCA, the Islamic Food and Nutrition Council of America, is a national organization that certifies over 2,000 brands of food that qualify as halal, serving both the Muslim consumer and companies seeking an entry into this particular market. The website Zabihah (www.zabihah.com) is another recent innovation that allows consumers to search for halal restaurants and products by state, and it is additionally available as an application for various smart-phones.