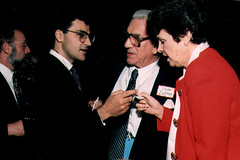 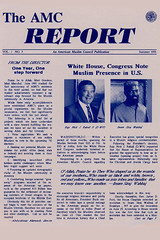 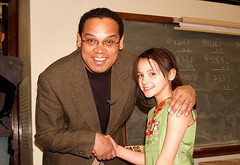 On June 25, 1991, Imam Siraj Wahhaj was the first Muslim to offer the opening prayer of the U.S. House of Representatives. Eight months later, on February 6, 1992, Imam W. Deen Mohammed offered the opening prayer on the Floor of the U.S. Senate. On April 2, 1992, Imam Dawud Abdus Salaam and Imam Enrique Rasheed delivered invocations before the California Senate and Assembly, respectively. Imam Abdus Salaam prayed:

“As people of faith, we pray with all people of faith, that the bond of trust be strengthened between those who govern and the governed. Bless this Senate, and all the branches of government, to work together in helping to raise the quality of life through all our cherished institutions . . . Make our intentions honorable and excellence the goal of all our strivings in building a better California and thus a better America for us all.”

These historical events were but one indication of a new voice being heard in the American public square: the voice of American Muslims. That voice has become amplified after the events of September 11th, 2001, however not without hesitation.

Muslims in the United States, until recently, have been reluctant to become actively involved in the political system. The Gulf War and the World Trade Center bombing brought outpourings of anti-Muslim sentiment in the 1990s; in 2001 and in the years following the terrorist attacks of September 11th, these anti-Muslim sentiments escalated. As a result, many Muslims have sought to keep a low profile to avoid harassment and prejudice. Over the past decades, some immigrant Muslims have avoided participating because of unfamiliarity with the political process or because of experiences of political oppression in their countries of origin; the first generation often looked to their American-born children to pursue political involvement. Some American Muslims resisted political participation because of religious convictions. They drew a classical distinction between dar al-Islam, a society in which Islamic norms prevail, and dar al-Kufr, the abode of unbelief, from which a good Muslim should remain separate. One extreme view expressed in this debate comes from a pamphlet of Khalif’ornia Publications called “Muslims in the West.” This pamphlet argues that the “melting pot” is dangerous to Muslims and links integration in the west with domination by the west; it argues that political participation in the American context is haram, forbidden.

Many American Muslims approach the issue of political activism by following the model of the Prophet Muhammad, who established an Islamic community in Madinah where there had been none before. In the past two decades, Muslim groups have begun to see political action as one way of spreading the Islamic message and correcting popular misconceptions about the religion, as well as educating legislators and public officials about Islam and the social, moral and political concerns of Muslims. Education is imperative because of both national and international concerns. Bias against Muslims in America is evidenced by rising numbers of hate crimes and by legislative initiatives in several states that seek to make shariah, or Islamic law, illegal. At the same time, anti-Muslim sentiment in America is also seen to have a negative impact on foreign policy, whether in Iraq, Afghanistan, Pakistan, and elsewhere throughout the world.

One of the first groups formed to engage in political action was the United Muslims of America (UMA), established in 1982. One of its founders, Waheed Siddiqui, explains that UMA’s emphasis is “to learn the political process, educate Muslims, motivate Muslims, get Muslims registered to vote, get to know the politicians, and be a part of the system.” UMA sets up hospitality suites at both Democratic and Republican conventions, encourages voter registration and participation, engages in interfaith work, and provides resources for all Americans.

The Muslim Political Affairs Council (MPAC), founded in 1988, represents a broad range of national Islamic organizations. Its goals include exposing discrimination against Muslims and other minorities; organizing Muslims as a mainstream political force; and lobbying the U.S. Congress and the administration on issues of concern to Muslims. The varied concerns of MPAC include United States foreign policy, issues of religion and state, and drugs and crime in America’s inner cities.

Since 9/11, an increasing number of American Muslims have chosen to pursue political careers at both federal and state levels. In 2006, Keith Ellison, the U.S. Representative for Minnesota’s fifth congressional district, became the first Muslim elected to the Congress. He was re-elected in 2010. Ellison received much media attention when he was sworn in to the U.S. House of Representatives with a Qur’an that had belonged to President Thomas Jefferson. André Carson, the U.S. Representative for the seventh congressional district of Indiana and an American Muslim, was elected in 2008.