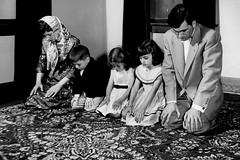 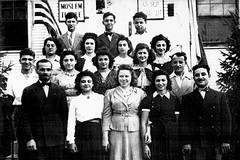 The majority of Muslims in America, like most other Americans, are immigrants or descendants of immigrants. In the late 19th century, Muslims began immigrating to the United States. The first immigrant Muslims came from Syria-Lebanon to the East Coast as early as the 1870s, later to be followed by European Muslims; Muslims from the Indian subcontinent came to the West Coast in the early 1900s.

The “Syrian” immigrants, from what is today Lebanon, Jordan, and Syria, were often single men, attracted by economic opportunity. Many worked as peddlers, especially in the mid-west. Gradually, Muslims began settling in industrial areas such as Fall River, Massachusetts, Chicago, Illinois, Toledo, Ohio, and Dearborn, Michigan. As early as 1901, many South Asian Muslim immigrants started coming to the U.S. from what is today India and Pakistan. They traveled by ship from India, entered through the port of Vancouver, Canada, and migrated south to California for better farming opportunities. Bosnian Muslims, entering through eastern ports, migrated to Chicago beginning in 1906. By the 1920s, American Muslims were widely diverse and dispersed throughout the United States, with South Asians, Albanians, Turks, Bosnians, as well as people from Syria-Lebanon, scattered in small communities throughout the U.S.

Many early Muslim communities did not have enough funds or people to establish a mosque; they met in private homes, renting out halls for holidays, and founded social organizations which were intended to preserve both their ethnic and religious heritage. The first documented communal prayer of Muslims in America was in Ross, North Dakota, in 1900. By the 1920s, small communities across the United States were gathering for prayers and forming the first Islamic Associations. One of the first groups formed was a Muslim charitable organization, the Red Crescent Society in Detroit. Other early associations of Muslims included South Asians in Sacramento, Bosnians in Chicago, Turko-Tatars in New York, and small immigrant communities from Syria-Lebanon in Detroit, Michigan, and Cedar Rapids, Iowa. With the First World War, the Immigration Act of 1924, and the Great Depression, Muslim immigration began to slow. While there was a brief upsurge in immigration between the two World Wars, racially biased immigration laws severely restricted the growth of many early Muslim communities.

The first known American mosques were established in Biddeford, Maine, in 1915; in Ross, North Dakota, in 1920; in Highland Park, Michigan, in 1923; and in Michigan City, Indiana, in 1925. Declining immigration and rising assimilation eventually caused most of these mosques to close. In 1934, the building now known as “the Mother Mosque of America” was established by a Syrian-Lebanese community in Cedar Rapids, Iowa. Fundraising for the mosque included community dinners and appeals to other Muslim communities scattered throughout the U.S., such as Chicago, Toledo, and Detroit. This simple structure, nestled in America’s heartland, is the oldest purpose-built mosque that is still in use today.