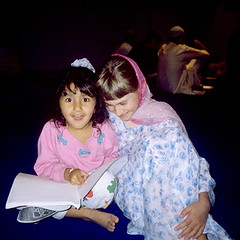 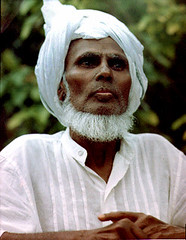 Sufism is not a separate sect of Islam, but rather a stream of interpretation emphasizing the interior path, or tariqah, of mystical devotion to God. A tradition describes the Prophet’s spiritual journey, the Mi’raj, in which he ascended into the highest heavens and came face to face with God. Sufism began as an imitation of Muhammad’s simple lifestyle and spiritual life in a time when the Umayyad khalifahs lived extravagantly. Many attribute the origins of the name Sufi to the coarse wool (suf) garment worn by early ascetics. Others suggest the term derives from the Arabic word for purity (safa). Sufis soon developed a devotional interpretation of the soul’s path to God, describing God as Love and Light.

Rabi’ah of Basra, an eighth century Iraqi woman, is known for her devotion and love of God. There are stories of her walking through the streets of Basra carrying a torch in one hand and a bucket of water in the other, declaring: “I want to pour water into Hell and set fire to Paradise so that these two veils disappear and nobody worships God out of fear of Hell or hope for Paradise, but only for the sake of eternal beauty.”

Sufi rituals focus on the remembrance, or dhikr, of God. Dhikr has a variety of expressions, including chanting God’s Names, music, and even dancing. The term “whirling dervish” refers to a member of the Mevlevi Order, followers of the 13th century Sufi saint Jalal al Din Rumi who perform a twirling ritual dance, concentrating on the presence of God. Sufism infuses Islam with a spirit of deep devotion and inner piety. It also offers a continuing critique of the more legalistic aspects of Islam, as these lines from the poetry of Rumi demonstrate:

“He observes obedience and fasting and prayer / And devotions and almsgiving and so on / Yet never feels the least expansion of soul. / He performs the devotions and acts enjoined by the law / Yet derives not an atom of relish from them.”

Sufi orders established hostels (khanqah) throughout the Muslim world for traveling Muslim traders and taught their neighbors the way of devotion to God. In this way, Muslim communities were established throughout East and West Africa, South and Southeast Asia. The Sufi way continues to bring new Muslims into the ummah and provides a vehicle for popular expressions of Islamic devotion.