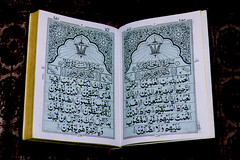 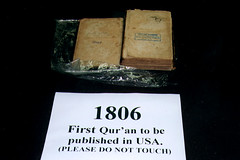 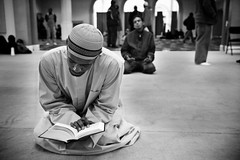 The Qur’an, the central scripture of Islam, begins with al-Fatihah, “the Opening”:

The Fatihah is recited in the daily ritual prayers known as salat. Many Muslims say that the Fatihah contains the essence of the teachings of the Qur’an. The word for God in Arabic is Allah, and Arabic-speaking Christians and Jews use the same word for God, Allah, in their prayers. God is the creator and ruler of the entire universe, the ultimate judge of all human beings; God is characterized by mercy and compassion. God is the guide who leads the faithful along the path of righteousness.

The word Qur’an literally means “recitation.” The words of the Qur’an were originally revealed to Muhammad in Arabic; he then recited them to his followers. While it is possible to translate the message of the Qur’an into other languages, Muslims consider translations to be interpretations and not the Qur’an itself. The Qur’an is arranged in 114 surahs generally in decreasing order of length, with each surah representing a chapter or division of the Book. Readers find prayers and praise, a recounting of God’s signs in creation, stories of prophets before Muhammad, passages about the Day of Judgment, legal matters and right behavior. Although it is a sacred book, the Qur’an’s full beauty and power are still preserved by reciters the world over. It is an oral text that must be heard and recited. The recitation of the Qur’an, tilawah, is a science, an art, and a form of devotion, governed by tajwid, rules of pronunciation, intonation, and approach. Competitions and performances, including many with young American Muslim participants, are held throughout the world.

Today, the Qur’an is also accessible online, from the full Arabic text to translations into dozens of languages, some versions even including commentary on the text or audio recitations. Online versions of the Qur’an also often feature search engines that enable the reader to locate specific words, phrases, or chapters. For English-speakers, online versions of the Qur’an also feature a variety of translations from different scholars. Since translation can change meanings and complexities that are found in the original text, it is important to note that no one translation can claim to present the Qur’an exactly as found in Arabic. However, so central is the Qur’an that Muslims have seized the opportunity to learn the Qur’an and make it known through the latest electronic media and in a variety of languages.