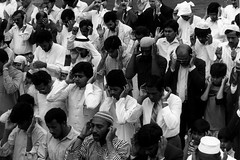 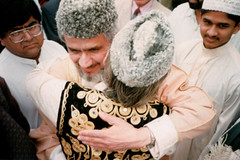 “O ye who believe! Obey Allah, and obey the Messenger, and those charged with authority among you. If ye differ in anything among yourselves, refer it to Allah and His Messenger, if ye do believe in Allah and the Last Day: That is best, and most suitable for final determination.” (Surah 4:59, King Fahd trans.)

Muslims are united in one ummah, or community, by their common testimony to the unity of God, their allegiance to the Prophet’s example, their performance of basic acts of worship and service to God. Within this unity there is also diversity, which can be seen in the development of various schools of jurisprudence, or fiqh, offering different interpretations of Qur’an and hadith, and debates about the nature of political authority and spiritual leadership. Muslims have interpreted the paradigm of the Prophet in many ways, each emphasizing certain aspects of his life and teaching. These traditions often overlap and complement one another, weaving the rich tapestry of Muslim piety.

An important stream of Islamic tradition developed around the model of Muhammad as interpreter of religious and legal doctrine, which came to be called shari’ah, the “path” or “way.” Shari’ah includes the law, ethics, and values which enable Muslims to follow the will of God in accordance with the paradigm of the Prophet. After the death of the Prophet, a group of scholars, or ‘ulama, emerged. Certain ‘ulama established the major schools of fiqh, Islamic jurisprudence derived from the shari’ah.

The Sufi movement developed devotional practices and mystical thought in the early centuries of Islam, drawing on the model of Muhammad’s close relationship with God. The movement was instrumental in the spread of Islam to all parts of the world. Sufism transcends many of the divisions in Islam, its organizations and artistic expressions inspiring Muslims to greater spiritual awareness.

Perhaps the most significant division of Muslims is that between those groups known as Sunnis and those known as Shi’is. The initial split involved a dispute over who should assume Muhammad’s leadership role after his death and what type of authority this person should have. These differences led to the initial development of various systems of law and theology.