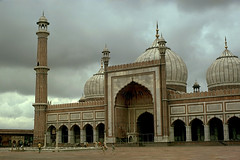 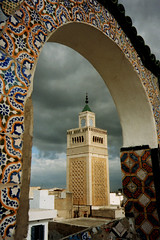 As the Byzantine and Persian empires were in decline, the first four “Rightly Guided” khalifahs sent Arab Muslim armies to conquer Syria, Egypt, Iraq and parts of Persia. Then the Umayyad khalifahs, ruling from 661-750 CE in Damascus, further expanded the boundaries of Muslim rule to Spain in the west and India in the east. It was only after several centuries of Muslim rule that the majority of the people in these lands became Muslims, for conversion to Islam is by choice and not compulsion. Muslim rulers, soldiers, traders, Sufis, scholars, poets and architects all contributed to the shaping of distinctive Islamic cultures in North Africa and Spain, Persia and India.

In West Africa and other regions, Islam spread through merchant communities and Sufi zawiyas (orders), with Muslim empires arising as native rulers converted to Islam and sought to expand their borders. Muslim reform movements that linked together religious and social concerns were particularly instrumental in spreading Islam.

The Abbasid dynasty overthrew the Umayyads in 750 CE and ruled from Baghdad until the 13th century. Though its political power declined after the 9th century, the khilafah remained an important symbol of Muslim unity. Classical Islamic civilization—the major hadith collections, legal schools, theological debates, Sufi orders, and traditions of Persian and Arabic poetry—flourished under the Abbasids.

The Fatimids established their dynasty in North Africa in 909 CE, conquering Egypt in 969. From their newly-established capital city of Al Qahira (Cairo), the Ismaili Fatimids created educational and cultural institutions, such as Al Azhar, and established themselves in trade. At its peak, Fatimid influence reached from the borderlands of India in the east to the Atlas Mountains in the west.

The Mongols from Central Asia swept across the eastern Islamic heartland to Syria, ending the khilafah at Baghdad in 1258. Many of the invaders adopted Shi’i Islam and the Persian language. Their descendants ruled Persia and central Asia for centuries, developing Persian culture and art. In the aftermath of the Mongol invasion, new empires emerged.

The Ottoman Turks, based after 1453 in Istanbul (Constantinople), established a vast empire that lasted from the 14th century until World War I. Supporters of Sunni Islam and Sufi orders, they were known for both military and architectural achievements. In the 16th and 17th centuries, the Mughals ruled northern India, where flourishing Indo-Muslim culture produced beautiful architecture, painting, and Sufi poetry. The Safavids championed Shi’ism in Persia from 1499 to 1722, encouraging Islamic art and philosophy.

Under each of these empires, transregional Islamic culture mixed with local traditions to produce distinctive forms of statecraft, theology, art, architecture, and science. Further, many scholars argue that the European Renaissance would not have been possible without the creativity and myriad achievements of Muslim scholars, thinkers, and civilizations.