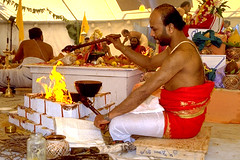 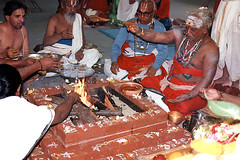 The first altars of the Aryans were those of the cult of fire. Agni, the fire, was celebrated in the Vedic hymns and kindled upon earth to carry prayers and offerings to the highest heavens. The central domestic rituals of the householder—daily rites, marriage rites, and finally funeral rites—took place at the fire altar. Laying and ritually kindling the fire altar was the job of brahmin priests. In ancient India, great rituals, called yajnas, were sponsored by kings and became increasingly elaborate, often involving several fires and many priestly specialists.

In the world of the Aryans, as glimpsed in the Vedas, there were hymns addressed to Agni and other gods, but there were no temples, nor were there murtis of the gods. In the Vedic age, the gods were imaged only in words. Agni was described as the one with flaming hair and golden jaws, the messenger of the gods, through whom oblations were carried from earth to heaven. Even the most elaborately constructed fire altars were not permanent, but were constructed in a temporary ritual arena called a yajnashala. The Agnicayana, for example, involved the construction of an altar, built of layers of brick in the form of a large bird. When the rituals were completed, the site was burned and abandoned.