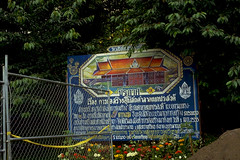 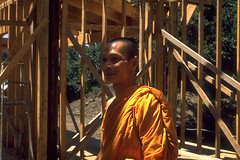 After the passage of the 1965 Immigration Act, there was a burst of new immigration from Asia. From East Asia came large numbers of former residents of Korea, Taiwan, and Hong Kong. Among the Koreans there was a high percentage of Christians, but even so there was a marked growth of Korean Buddhist temples in the United States. The Chinese newcomers revitalized the many Chinatowns around the country and created new suburban Chinese centers, such as Monterey Park in California, which, by the 1990s, was half Chinese. Chinese temples began as small ones. The Dharma Seal Temple in Rosemead, California, for example, made a home in a former church. Within two decades, however, there were huge temple complexes constructed, such as the Hsi Lai Temple in Hacienda Heights, California, the Chuang Yen Monastery in Kent, New York, and the Jade Buddha Temple in Houston. Also from Southeast Asia came a somewhat smaller group of Thai immigrants, whose flagship temple, Wat Thai in North Hollywood, was started in 1979. Today, there are nearly one hundred Thai Buddhist temples across the United States.

In 1975, the fall of Saigon to the Viet Cong triggered another major movement of Asian immigrants—the refugees who came from Vietnam, Laos, and Cambodia. In April of 1975 alone, some 86,000 Vietnamese were airlifted from Saigon and transported to the United States. By the end of 1975, 130,000 had arrived. By 1985, the total Vietnamese population of the United States was 643,000. As in Vietnam, their temples were the residences of monks. The small suburban homes of monks thus became the first Vietnamese Buddhist temples in America. The living room was, most often, the Buddha hall containing an altar for the Buddha and, perhaps, a small family memorial altar for the dead. By 1990, in Orange County, California, which had the greatest density of Vietnamese residents, there were some two dozen small “home temples.” Similar small temples could be found in Denver, Houston, New Orleans, and Chicago; in Olympia, Washington, Memphis, Tennessee, and Fort Smith, Arkansas. Later, as the community became established, temples were newly constructed—in Oklahoma City, in Minneapolis, and in Garden Grove, California. A 1992 booklet published in Westminster, CA lists the addresses of 143 Vietnamese temples in the United States. Today there are over 200.

The first sizable immigration of Cambodians came in 1979 when, with the fall of Pol Pot, many were able to escape the “Killing Fields,” cross the border into Thailand and eventually make their way to America. According to some estimates, two to three million Cambodians were killed during the reign of Pol Pot and the Khmer Rouge. Most of the country’s Buddhist temples had been desecrated, and only about 3,000 of Cambodia’s 50,000 monks escaped death. Thus, the 150,000 Cambodians who came to the United States between 1979 and 1985, were, on the whole, a traumatized population, 98 percent of whom had come from refugee camps in Thailand.

For most Cambodians, preserving their Buddhist tradition in the United States is of critical importance. As one young man put it, “When you leave Buddhism, eventually you will lose your Cambodian identity because Buddhism is the foundation of Cambodian culture.” The largest concentration of Cambodians, some 40,000, live in the Long Beach area of California, where there are several small temples and one large temple, Khemara Buddhikarama, housed in a former union hall. In the Boston area, there are nearly 30,000 Cambodians, with temples in North Chelmsford, Lynn, and Lowell. There is a Cambodian temple in a rural area south of Minneapolis and a huge temple and monastery built in the Washington, D.C. suburb of Silver Spring, Maryland, and many more across the nation. Even though a changing political landscape in Cambodia today offers an opportunity to return, the Cambodian-American Buddhist community has put down some deep roots here.

The Buddhist temples of all these immigrant groups also serve as community centers for the preservation of cultural identity and the teaching of language. The Thai and Cambodian temples have dance classes for young girls. The Japanese temples may have Taiko drumming. Festivals are celebrated with elaborate food fairs of traditional dishes. At a number of these temples, there are “parallel congregations” of Asian immigrant Buddhists and American-born practitioners drawn to Buddhism by its philosophy and meditation practice.

While recent years have not seen another incident resulting in mass Buddhist migration to the United States like that of the 70s and 80s, new temples are nonetheless being continually built. For example, in 2010 plans were approved for a 60-foot-high Thai Buddhist temple with a 160 foot tall peak in Raynham, Massachusetts, what will be one of the largest Buddhist temples in the world. As the number of Buddhist temples continues to expand every year, it is clear that the number of Buddhist centers across the United States is far from its peak.