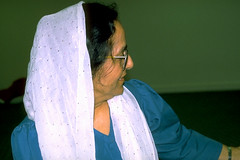 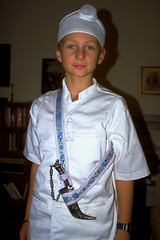 Sikh men in America and throughout the world are easily recognized because of their turbans, flowing beards and stainless steel wristbands. The turban is worn in fulfillment of one of the basic vows of Sikhs—not to cut the hair, but to let it grow naturally as a sign of complete dedication, body and soul, to God. Both men and women keep this vow, women wearing a long head scarf called a chunni and men wearing the turban.

This marker of Sikh identity is but one of what are called the “Five K’s” kept by Sikhs, each one of which begins with the letter “k” in Punjabi:

1. Kes: The word means simply “hair” and as a Sikh vow refers to uncut hair.

2. Kirpan: A short sword or knife.

4. Kangha: A wooden comb worn in the hair knot.

5. Kacchera: Shorts, worn as an undergarment.

In 1699, the Sikhs, besieged with troubles and at war with the Mughal government of northern India, rallied around Guru Gobind Singh. At this time, Guru Gobind Singh performed the Sikh initiation ceremony, creating an intensely dedicated group of Sikhs willing to give their all for the Sikh community. It was called the Khalsa. The unwavering observance of the Five K’s became the mark of the Khalsa, and, by aspiration, that of the whole Sikh community. Many Sikhs have not taken initiation into the Khalsa, but still keep these distinctive emblems of Sikh identity.

Each of the five K’s has a practical function. For instance, the kangha is used to comb the long, uncut hair and the kirpan is a weapon with which the Sikh is obliged to protect the oppressed. However the Five K’s gradually attained a deep symbolic significance as well. A 1991 newsletter of the Colorado Singh Sabha in Denver describes this dimension: Keeping uncut hair “is an integral part of the natural state of human beings.” It signifies “surrender of one’s ego to the Guru” and represents the “declaration that one leads one’s life according to the way of the Guru.” The kirpan is “the sword of knowledge, which has cut the roots of ego.” The bracelet is a reminder “to shed falsehood and practice universal love.” Its perfect circular shape is also understood as a symbol of the eternal nature of God. The comb not only keeps the hair clear, but keeps the mind inwardly clean; and the shorts refer to sexual fidelity and the ethical value of overcoming lust.

Sikh identity means aligning one’s life with the truth of Ek Onkar, the One God. The five K’s continually remind Sikhs of the ethical and spiritual implications of this truth.