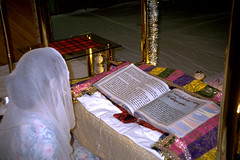 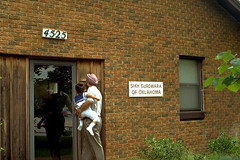 Sikhism is a strong monotheistic religious tradition. It grew up in the full light of history, in response to the teachings of Guru Nanak, who lived in the late fifteenth and early sixteenth centuries in India. Guru Nanak is said to have received revelation directly from God and transmitted it in the hymns that have been cherished and sung by Sikhs for nearly five hundred years. These hymns, composed in beautiful verse, pulsate with a mystical, yet practical message. They proclaim the Divine Name of God, the liberating power of devotion to the Name, the kinship of all people, and the equality of men and women.

A vibrant community of disciples called Sikhs gathered around Guru Nanak. Before his death, he designated a successor as guru. Thus began a lineage of Gurus that would extend ten generations. Sikhs call their tradition of belief and practice the Sikh Panth, meaning the “community of the disciples of the Guru.” It is a community shaped in tone and spirit by the very first words of the Sikh scripture, the Guru Granth Sahib: Ek Onkar, God is One. It is a universal and inclusive affirmation. The one God can only be the God of all humanity, not the Sikhs alone. Sikhs do not divide the world into believers and non-believers, but rather find beauty and power in all religions, insofar as they seek to know God. The Guru Granth Sahib, thus includes not only the hymns of the gurus, but hymns of some of the Hindu and Muslim poets and saints as well.

The Sikh community has flourished for the past five hundred years. While the community’s heartland is in the Punjab in northwest India, Sikhs have now settled throughout the world. Their gurdwaras, the places of worship called “the gateways of the Guru,” are centers for community gathering and community service—whether in India or in Kenya, in Southall, England or Fremont, California. Today, the United States is home to 500,000 of the world’s twenty-five million Sikhs.

A statement of belief composed by Guru Nanak, the Mool Mantra is performed in every gurdwara program.

Translation:
There is one God whose name is True.
God is the Creator.
God is without fear.
God is without enmity.
God is of eternal form.
God is unborn, uncreated, beyond incarnation.
God is self-existent and self-sufficient.
God is attained by the grace of the Enlightener.