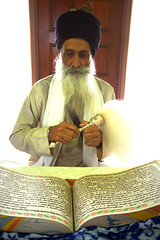 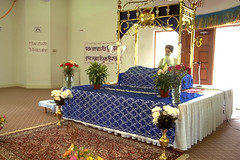 Guru Nanak and his successors were considered to be ordinary persons, but the word, or shabad, of their hymns is understood to be the divinely inspired word of God. It springs from deep communion with God. Since the knowledge of God is absorbed from these beautiful words, the collected hymns later came to be called Guru: the Guru Granth Sahib.

Guru Nanak saw himself as a vehicle of the Divine word and seems to have carefully collected his hymns in written form. Guru Amardas (1479–1574) expanded this text by adding his own hymns. It was the fifth guru, Guru Arjan (1563–1606), who is traditionally believed to have compiled the first definitive collection of scripture in the basic form it has today. He brought together the hymns of the first four gurus, adding some of his own hymns and those of fifteen Hindu and Muslim saints, making the Sikh scripture unique in its inclusion of the inspired hymns of non-Sikhs.

Bhai Gurdas, a senior member of Guru Arjan’s congregation, was the scribe who prepared the text of what came to be called the Adi Granth, literally the “First Book.” It was written in the Gurmukhi script, distinctive to the Sikh tradition and the hymns of the Holy Book. When the work was finished in 1604, Guru Arjan formally installed the Adi Granth in the newly completed temple, the Darbar Sahib, in Amritsar.

The final recension of the Adi Granth was completed by Guru Gobind Singh (1675–1708), the tenth guru. Before his death in 1708, he did something of decisive importance: rather than investing the Guruship in a human successor, the authority was transferred to the granth (scripture) and the panth (community)—the scripture as the spiritual manifestation of the Guru and the community as the physical. From thenceforth the scripture was called the Guru Granth Sahib and the community of initiated Sikhs was called the Guru Khalsa Panth. Since the scripture contains the word of God, it is the scripture that enlivens and inspires the Sikh community. And, of course, it is not the physical book that is sacred, but the words of God’s revelation it enshrines.