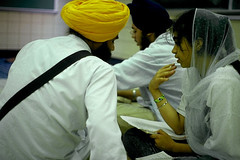 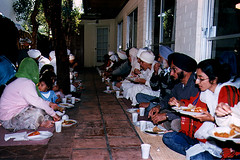 Guru Nanak’s understanding of God is summed up in the Mul Mantar. It is the opening stanza of what is called the Japji, the morning prayer recited by Guru Nanak and by all Sikhs everywhere. The Mul Mantar, a root teaching of the Sikh tradition, lays a foundation for a universal religious vision:

There is one God,
Eternal truth is his name,
Creator of all things and the all-pervading spirit.
Fearless and without hatred,
Timeless and formless.
Beyond birth and death, Self-created.
By the grace of the Guru he is known.

Guru Nanak emphasized the “formless” God, spoken of as Nirankar. God may be spoken of in many ways—as Allah or Brahman, Ram or Rahim. But the great name of God is Truth. God cannot be known in any image or form for the Nirankar is invisible, infinite, beyond the confines of form. Even so, this transcendent God can be known by the grace of the Guru. The love of God is the highest goal of humanity. God dwells within the human heart. The nectar of the Divine name, heard and sung, fills the heart to the brim. Thus, the very center of Sikh worship is the singing and hearing of God’s word in the form of the shabads, or devotional songs.

Guru Nanak’s God-centered teachings had strong social implications. He was outspoken in his critique of hypocrisy and superficiality in religious practice. To Hindus he insisted, for example, that bathing in holy rivers alone cannot wash away sins of injustice and greed. The most important thing is not ritual purity, but purity of words and deeds. Similarly, to the Muslims of his day he insisted that required prayers alone would be ineffective if those who offered them had their minds on worldly problems, instead of on God. “Make mercy your mosque and devotion your prayer mat,” he said.

He taught that all people, whether rich or poor, women or men, kings or peasants, can approach God equally. In one of his hymns, he sings:

The lowest among the low castes,
lower than the lowliest,
Nanak is with them:
He envies not those with worldly greatness.
Lord! The glance of grace falls on the land
where the humble are cherished.

Guru Nanak opposed the Brahmin priesthood and the caste hierarchy of Hindu society. He established the precedent for what became the langar, the “community meal,” specifically to make manifest the Sikh rejection of Hindu caste. Everyone coming to the langar must sit together as equals, even if this might violate caste rules for the Hindus. The leveling experience of eating a common meal became symbolic of the Sikh ethos and essential to the life of the Sikh community. Those who became part of the Sikh Panth were expected to give up social inequality.

Guru Nanak was a householder, not an ascetic or a yogi. Kartarpur was a community of simple living, honest work, charity, and hospitality. Thus, the path of the Sikhs is insistently not “other-worldly,” but fully engaged in the world. Its dominant note is not asceticism, but activity and service. It is a path of householders, not renunciants. It is said that Guru Nanak passed over his own son, Sri Chand, as his successor because of his rather ascetic bent.