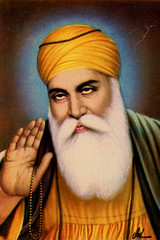 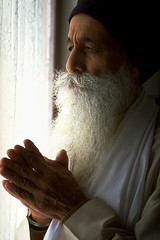 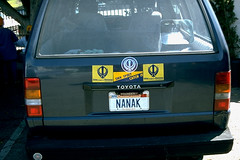 Guru Nanak (1469–1539 CE) was born in a village called Talwandi, about forty miles from Lahore in what today is Pakistan. He is said to have been from a merchant family. He married and had two sons. In his early twenties, Nanak moved to Sultanpur, an important town on the main road between Lahore and Delhi, where he worked as a clerk in the Lodi administration. When he was about thirty years old, he had an experience that he described as a revelation, a direct encounter with God that shaped the rest of his life.

The stories Sikhs later told about Guru Nanak, called janam sakhis, recount his childhood inwardness, along with his engagement with social issues. They tell of his honesty and devotion to truth as a youth. And they tell the story of this remarkable and transformative encounter with God. One day Nanak went to bathe in a river, accompanied by a friend. Nanak mysteriously disappeared, and his frantic friend, after several attempts to rescue him, returned to Sultanpur with the dreadful news and the clothes Nanak had left on the bank. Three days later, however, Nanak reappeared. He emerged from the water and his first words were: “There is neither Hindu nor Muslim.” He went on to articulate that God was neither Hindu nor Muslim and so he, Nanak, would choose to follow God’s path. Guru Nanak described his mystical encounter with God in one of his hymns: He was taken to the court of God and given a cup of divine nectar called amrit to drink. This nectar bestowed the gift of God’s name upon him and he was charged by God with the preaching of the Divine name.

With this charge, Guru Nanak left his job and spent many years traveling throughout India and, according to early Sikh sources, even to the Middle East. He preached his message in the form of beautiful hymns called shabads. According to tradition, he was accompanied by Mardana, a musician and a Muslim by birth. Guru Nanak sang of the oneness of God, the equality of all people, the futility of empty ritualism.

The stories that grew among the company of his disciples give a glimpse of the wisdom of his teachings. It is said, for example, that he went as far as Makkah. At the end of his journey, he fell asleep in the broad arcades of the holy Ka’bah of Makkah. He was shaken awake by an official who scolded him for sleeping with his feet in the direction of the holy house of God. He responded, “Then move my feet to a direction where God is not, and I will sleep with my feet in that direction.”

Eventually Guru Nanak settled down again with his family in the Punjab. He became a farmer and established a village of Sikh disciples called Kartarpur. There he continued preaching. Disciples gathered around him in a community of work and worship. He devoted the last twenty years of his life to the shaping of the first Sikh community. Before he died, Guru Nanak appointed one of his faithful followers as successor in the care and leadership of the community. He named him Guru Angad, the “limb” of Guru Nanak.

Guru Nanak died when he was seventy. According to Sikh tradition, on the day of his death, the community gathered around Nanak while he reassured them. Those of Hindu background insisted they should cremate his body, while Muslims wanted to bury him as a great saint. Nanak said, “Place flowers on both sides of my body—flowers from the Hindus on the right side and flowers from the Muslims on the left. If tomorrow the flowers of the Hindus are still fresh let my body be burned, and if the flowers of the Muslims are still fresh, let it be buried.” He passed away and was covered with a sheet. The next day, both the Muslim and Hindu flowers were fresh, but there was no body beneath the sheet.

Guru Nanak was, indeed, neither Muslim nor Hindu, though people of both traditions were drawn to him. He criticized both traditions. In this he was in the company of the mystics—the Sufi saints and the bhakti singers whose experiences of God found challenge within their established traditions. Guru Nanak’s divine hymns praised the One who cannot be defined by human categories or confined to human institutions. His simple path of hard work and ebullient praise eventually became a new religious tradition.