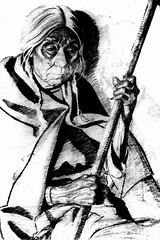 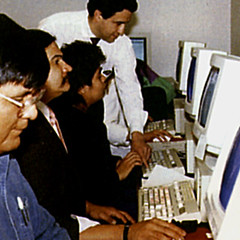 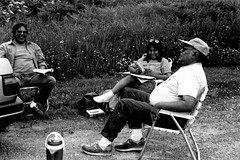 At the core of America’s frontier myth is the image of “the Vanishing Indian.” Noble, brave, and yet destined to sacrifice both freedom and land for the making of America, the image of the Indian that has captured America’s imagination for centuries is that of “The Last of the Mohicans.” Such myths course so deeply in the American imagination that many believe there are no more Indians, or at least no more “real Indians.” But the vocal and visible presence of Native Americans today challenges this myth. Native men and women say plainly that American expansion and American history rests on stolen land. Perhaps it is more comfortable for the dominant culture to believe the stereotypical image of the stone-faced, silent, and vanishing Indian, but it is far from true.

Today hundreds of thousands of Native people from more than 500 distinct tribal communities testify to the fact that Native Americans are still very much present in America. They speak English, Spanish, Navajo, Ojibwe, and more than one hundred other languages. They live on reservations and on farms, in towns and in cities. They perform ceremonies, they run businesses, and they go to medical school. They tell myths and they write novels. The very presence of so many Native Americans indicates an uncommon will to survive. Many Native people link their survival to their religion, to the pervasive spiritual dimension of their way of life. No less than other communities in America, and perhaps more than most, the vitality of religion lies at the heart of Native identity and experience.

For Native American people, these spiritual roots run deep in the history of the continent. Though archaeologists disagree over the precise dating of the initial settling of North America, and while many Native traditions maintain that Native communities have always been here, archaeologists agree that the earliest solidly datable evidence—the site of a nomadic camp in what is today Colorado—is 13,000 years old. The Adena and Hopewell cultures of the Ohio River Valley, with their mounds and earthworks, provide evidence of cultures that arose in the first millennium BCE and continued until perhaps 700 CE.

Today’s Native peoples link themselves to a long, rich heritage on this land through ceremonies performed and stories recounted, through herbal healing and sacred foods, and through particular sacred places, such as Eagle Butte in South Dakota or the ceremonial kiva buildings on the plazas of New Mexico’s Pueblo villages.