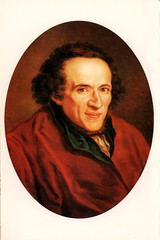 The philosophical endeavor to reconcile traditional religion with modern culture has long had a place in Jewish history. Philo of first century Alexandria, Rav Saadia Gaon of tenth century Babylonia, Maimonides of twelfth century Spain and Egypt: many great Jewish thinkers have taken pains to integrate the Judaism of the Torah and the Talmud with the best of contemporary thought. Maimonides not only codified Jewish Law in his monumental work the Mishneh Torah, he also wrote Guide for the Perplexed, which addresses an educated audience perplexed by the contradictions of the Torah and Aristotelian philosophy. The book had a great influence on the development of Jewish intellectual traditions.

By the modern period, ideological syncretism became the norm for Jewish laity and scholars. Throughout the seventeenth and eighteenth centuries in cosmopolitan centers such as Amsterdam and Venice, many Jews began to participate in the life of the majority culture. Toward the end of the eighteenth century, the promise of civil equality was held out to Jews in France, Germany, and other European nations on the conditions that they would assimilate into modern, mainstream customs. The argument was made that if only Jews would shed their particular customs and become members of Enlightenment society, they would finally find acceptance among the peoples of Europe.

Hence a new movement was born for the improvement of the Jews: the Haskalah (“the Jewish Enlightenment”). Centered in Berlin and fathered by the German-Jewish philosopher Moses Mendelssohn, the Haskalah was one of the first important movements of Jewish modernity. While preserving the essentials of Judaism, it sought to change the public image of the Jew through secular education. Its motto, “Be a Jew at home and a German in the street,” became the underlying ethos of modern Jewish acculturation. Out of the Berlin Haskalah emerged the academic group Wissenschaft des Judentums (“the science of Judaism”), which hoped to improve the image of Judaism through scientific research and objective analysis of Jewish sources. The Wissenschaft movement was the fountainhead of all contemporary academic Jewish studies. The Haskalah and Wissenschaft movements soon altered the nature of Judaism itself, and a third movement was born: Reform Judaism.

Reform Judaism originated in Germany in the early nineteenth century and has served as the foundation for many subsequent Jewish responses to modernity. In Hamburg in 1818, a group of reform-minded Jews started a synagogue which they called a temple, a name once reserved for the Temple in Jerusalem in the expectation of return, but now applied to a place of worship in Germany where Jews had put down roots as citizens. By mid-century, the Reform movement gained the leadership of more radical German Jews like Rabbi Abraham Geiger and Rabbi Samuel Holdheim. The more moderate Historical School (today called Conservative Judaism) was founded by Zecharias Frankel; the neo-Orthodox trend (today’s modern Orthodox Judaism) was first championed by Samson Raphael Hirsch. Even the Hasidic world found a modernizer in the Musar movement of Israel Salanter. To varying degrees and in diverse ways, they all represent the attempt to reshape traditional Judaism in order to conform more closely to the universalist ethos of Enlightenment-influenced Western Christianity, so that Jews might integrate more easily into the modern nation-state.

Other Jewish responses to the modern world include new cultural and political ideologies. As the Haskalah spread eastward, for example, the movement took on a more literary character. The spread of modern Jewish literature in Hebrew and Yiddish literary movements was one outgrowth of the Russian Haskalah. Another was the rise of new forms of political Jewish expression, including Zionism, Diaspora Nationalism, and Bundism. Zionism referred to the idea of the restoration of the Jewish homeland in Palestine. The theory of Disapora Nationalism held that the Jews of Eastern Europe might form their own autonomous polity based upon the Yiddish language and secular political principles rather than traditional Judaism. Bundism was the Jewish socialist movement born in response to the anti-Semitism of “internationalist” socialism. While Diaspora Nationalist and Bundist movements would not have the same success as Zionism, they were important expressions of a distinctively Jewish secularism. Secular Jewish culture lives on today in phenomena such as the Yiddish revival, Klezmer music, and many other areas of Jewish arts and letters.