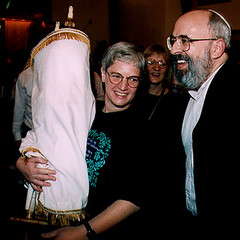 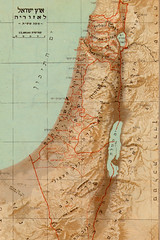 From the perspective of Jewish tradition, all Jews share a common ancestry descended from Abraham and his wife Sarah, and are therefore part of the same extended family. The Torah attributes this commonality to the patriarch Abraham: in his covenant with God, Abraham was promised that he would become the father of a great nation. Fulfilling the promise, they had a son, Isaac, whose own son Jacob was renamed Israel, literally “the one who struggles with God” (Genesis 32:29). Israel is the name of a person, a people, and a land.

The patriarch Jacob, renamed Israel, fathered twelve sons, the progenitors of the historic twelve tribes. First, they were known as bnei yisrael (“the children of Israel”). To this day, members of the Jewish community describe themselves metaphorically as a “tribe” and “family.” Second, the children of Israel (bnei yisrael) became the nation of Israel (am israel), following their liberation from slavery in Egypt and the uniting of the Israelite clans by the decree of God. Third and finally, the pivotal stage in the biblical account of nation-building was the inheritance of the promised land of Canaan, which thereafter became known as eretz yisrael, the land of Israel.

From a historical perspective, however, it may be more appropriate to highlight the transformation of the Jewish people from a loose confederation of tribes into a unified nation in the period of the Israelite monarchy, beginning in the late eleventh century BCE. After a period of political and social flux, King David (c. 1000-960 BCE) united the kingdom of Israel around his capital city of Jerusalem. David’s son Solomon (c. 961-922 BCE) built a Holy Temple in Jerusalem, thereby unifying the rituals and worship of the Israelite tribes as well. Following Solomon’s death, his warring sons divided the kingdom between the northern Kingdom of Israel and the southern Kingdom of Judah.

In 722 BCE, the Kingdom of Israel was conquered by the Assyrians and its population deported. These were called the ten “lost” tribes (“lost” to the rest of the Israelite world). While tragic, the Assyrian conquest helped solidify those who remained into a more cohesive Israelite polity. The subsequent fall of the Kingdom of Judah (“Yehudah” in Hebrew, or “Judea”) similarly encouraged the surviving Israelites to develop a stronger, more cogent sense of identity in the face of violence and deportation.

This identity would soon face a severe challenge. In the year 586 BCE, the Babylonians conquered Jerusalem, destroyed the holy Temple, and exiled the majority of the population. In exile, the Israelite people responded by developing a sense of unity transcending geopolitical divisions (i.e., a strong sense of peoplehood). Israelite religious leaders of this period drew upon their situation to express much of the writings of the Tanakh, transforming their socio-political context in exile in Babylon into narratives of Israelite trials in slavery, oppression, and politics. It was during the period of the Babylonian exile, which lasted several decades, that the Israelites first came to be called Judeans (“Yehudim” in Hebrew, the etymological root of the words “Judaism” and “Jewish”).

From both traditional and historical perspectives, the bond of peoplehood has informed Jewish identity throughout the centuries. The familial element has remained strong, emphasizing birth as one’s entrance into the Jewish community. A Jew is defined in Orthodox Jewish law as someone born of a Jewish mother; though the principle of matrilineal descent has been challenged in recent decades, the notion that Jewishness derives from family background forms a key component in the Jewish self-image. Conversion to Judaism is possible, but the concept of family heritage remains paramount: the convert is welcomed as a new, adopted member of the family. The male convert reenacts Abraham’s covenant for men, including the b’rit milah (the covenant of circumcision), and is thus considered to have joined the people, not simply adopted the religion. Meanwhile, a female convert will be regarded as the mother of Jewish children. King David himself was the product of such foreign lineage, having descended from the convert Ruth.

Peoplehood is not a biological or racial concept, but a symbolic one, emphasizing the mutual responsibility implicit in family relations, a basic value that has infused Jewish life through the ages. In the nineteenth century, peoplehood found political expression in the modern movement of Zionism, influencing the establishment of the state of Israel in the twentieth century.