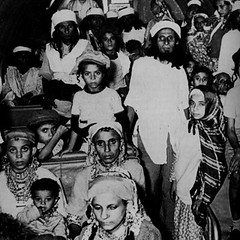 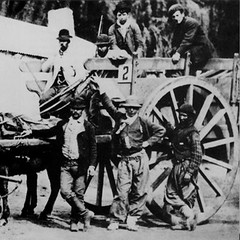 Galut is the Hebrew word for “exile,” and refers to the repeated exile of the Jewish people from their homeland in Israel. Some Jews have chosen to live outside Israel for centuries; in ancient times they formed communities in the Near East and eventually around the Mediterranean. But the Jewish community has also been driven into exile by force, notably to Babylonia (first after the fall of Jerusalem in 586 BCE and, later, in a far more devastating move after the Romans’ near-total destruction of Judea in 135 CE).

Exile in Babylonia gave rise to the first permanent Jewish community outside of Israel. Even after periods of restoration, most Jews chose to remain behind in Babylonia, having obeyed the instructions of the prophet Jeremiah, who advised the exiled community to “build houses and live in them, plant gardens and eat their fruit, take wives and beget sons and daughters… and seek the welfare of the city to which I have exiled you and pray to the Lord on its behalf” (Jeremiah 29:5). Refusing to dwell upon their homelessness, the Jewish exiles adopted a novel attitude: they assimilated into the culture in which they found themselves, while maintaining their separate identity as Jews and their adherence to Jewish tradition and culture. This interwoven pattern of assimilation and separatism would persist throughout the history of the Diaspora, a Greek term coined specifically for the dispersion of Jews throughout the Hellenistic (or “Greek-speaking”) world.

Following the Hellenistic conquest of Palestine in 323 BCE, Jews flocked to Ptolemaic Egypt, especially the city of Alexandria, where a flourishing community would later produce the Septuagint (the Torah translated into Greek). The Alexandrian Jewish philosopher Philo (25 BCE-40 CE) famously brought together much of Hellenistic and Jewish thought, lending a good deal of influence to Western theology and philosophy.

By 70 CE, following the Roman destruction of the Second Temple in Jerusalem, Jewish communities could be found throughout the civilized world. It is estimated that they constituted as much as 10 percent of the Roman Empire, and up to 20 percent of its eastern half. Major Jewish communities existed in Rome, Antioch (Syria), Ephesus (Turkey), and Sardis (Asia Minor). Living in such widespread locales, Jews entered numerous occupations, including farming and horse breeding, crafts and manufacturing, business and trade, civil administration and the military. After the final defeat of Israel at the hands of the Romans in 135 CE, the pace of emigration from Israel quickened, and Jews continued to establish new communities even farther afield.

The communal structure of the early Diaspora set the pattern for later Jewish communities elsewhere in the world: within sovereign states, larger Jewish communities often had their own internal administration. In Poland, for example, Jewish communities were governed by a quasi-autonomous body called the kehillah (“community”). Within sovereign cities, the Jewish community was often assigned a separate status and occupied a special quarter. Hence, the Jews of North Africa developed the communal district called a mellah, whereas the Jews of Central Europe were compelled to live in a confined area called a ghetto, so named after the first of its kind in sixteenth century Venice. Still later, the Jews of Eastern Europe created a new form of community, a predominantly Jewish town called a shtetl. Echoes of these diverse communal forms may be seen today in the nationwide Jewish socio-political organizations and in the local ethnic neighborhoods of American and, more broadly, Western Jewry.

The communal expansion of the Diaspora also served to fragment world Jewry. Living apart in diverse regions over many centuries, Jews have taken on a multiplicity of cultural and even racial characteristics. Today, the most critical distinction is that between Sephardic and Ashkenazic Jews, representing the two most historically significant communities. During the Middle Ages, the largest Jewish community in the world was in Spain under Muslim rule, arguably a Golden Age of Jewish life and freedom. This flourishing Jewish community was referred to by the Hebrew name for Spain, Sepharad. At the same time, the Jewish communities of France and Germany were developing a distinctive culture of their own in a community known as the Hebrew name for Germany, Ashkenaz.

Following the Christian reconquest of Spain and the ultimate expulsion of its Jews in 1492, Sephardic exiles spread throughout the port cities of the Mediterranean, Palestine, and northern Europe. In this new Sephardic Diaspora, Jews often came into contact with their Ashkenazi counterparts, also victims of expulsions and other forms of persecution. Both groups maintained their own communities, strengthening their separate communal identities. Language was a key factor in creating the separation: Sephardic Jews preserved their culture in the Judeo-Spanish language of Ladino, while Ashkenazic Jews remained loyal to Judeo-German, or Yiddish. The split between Sephardic and Ashkenazic Jewry has only begun to be blended in the melting pot of modern Israel, where Jews of various cultural and linguistic groups have begun to merge into one Israeli Jewish society. The establishment of modern Israel has ended nearly 2,000 years of Jewish exile and genocide, although not without controversy of its own.

The experience of exile came to characterize the spiritual sensibility of the Jewish people in Diaspora. The concept of being outcast and marginalized, of expulsion and wandering, came to be seen as an intrinsic part of Jewish existence. At times in Jewish history, the theme of interminable suffering has also seemed to pervade all aspects of Jewish life. But life in the Diaspora has also encouraged a rich variety of Jewish food, music, and folk customs, as well as the positive energy and vision of Jewish religious culture. Life in the Diaspora has highlighted the Jewish belief in an eventual return to the homeland of Zion, the worldwide interconnectedness of the Jewish people, the strength of Jewish family and community life, the sustenance of studying Torah and observing mitzvot, and perhaps more than any of the above, the belief that God has watched over the Jews and will ultimately redeem them from their long exile.