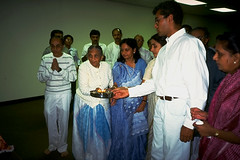 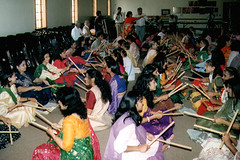 Paryushan is the most important Jain religious observance of the year. For both Shvetambars, who observe the festival over a period of eight days, and Digambars, for whom Paryushan Parva lasts ten days, this is a time of intensive study, reflection, and purification. It takes place in the middle of the four-month rainy season in India, a time when the monks and nuns cease moving about from place to place and stay with a community. Paryushan means, literally, “abiding” or “coming together.” The monks and nuns who have to maintain fixed residence during the rainy season abide with the laity and are available to them for instruction and guidance. It is also a time when the laity take on various temporary vows of study and fasting, a spiritual intensity similar to temporary monasticism. In this respect, it bears comparison with periods of rigorous religious practice in other traditions, such as the Christian observance of Lent. Paryushan concludes with a time of confession and forgiveness for the transgressions of the previous year.

In the United States, Jains often combine the two observances, with the eight days of the Shvetambar tradition followed by the ten of the Digambar tradition. It is customary for religious leaders, such as Gurudev Chitrabhanu, to stay at one of the Jain centers in order to be available to the laity during the period of Paryushan. Arrangements are made with such leaders well in advance to assure members of their presence. There are not enough to cover all the centers, however. Some centers may host visiting renunciants from India who have not yet undertaken all the vows of full mendicancy and can therefore travel in vehicles and live in America, with all the compromises to the monastic life that this entails. Other centers may have the presence of samans or samanis, monks and nuns in a new order created especially to attend to Jain communities outside India.

Even if there are no religious leaders in residence, the laity meet every evening during Paryushan, shifting their focus of life to the soul for these days. The most important part of Paryushan is daily meditation and prayer, which provides an opportunity for looking within and looking toward the teachings of the Tirthankaras for guidance. Beginning on the fourth day of Paryushan, it is customary for Murtipujak Shvetambars to read from the Kalpa Sutra, a scripture which recounts the life of Mahavira—the fourteen dreams of his mother before his birth, followed by the story of his birth, his life, and his liberation. It also recounts the lives of other Tirthankaras and the rules of Paryushan. In India, the book of scripture would be carried ceremonially through the streets, water sprinkled in its path along the way, purifying the entire town.

Jains often take time off from work during this period and eat a much simpler diet. They add to their normal vegetarian restrictions by avoiding such foods as potatoes, onions, and garlic—the eating of which entail killing the plant instead of just taking its fruit. Many Jains also fast during Paryushan, some for the entire period. At the end of Paryushan, those who have fasted for the eight or ten days break their fast with a special meal during which they do not touch food, but are fed by friends and loved ones in honor of their achievement.

For Shvetambars, the final day of Paryushan is Samvastsari Pratikraman, the “Annual Confession.” The act of confessing any infringement of the five great vows to one’s teacher is part of the life of a devout Jain throughout the year. But on this day it becomes the focus of the entire community. The ritual of asking forgiveness from the teacher is widened in scope to include family and friends and, finally, all living beings. The culmination of confession is receiving forgiveness from all living beings and also granting forgiveness to all beings.

This ritual of forgiveness is sometimes called the rite of “universal friendship.” Most Jain centers in the U.S. now conduct at least part of the ritual of forgiveness in English for the benefit of the youth. The St. Louis and San Diego Jain communities, for instance, have published English-language “Pratikraman” booklets. The spirit of the day is contained in this verse, recited by heart: