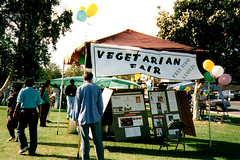 Ahimsa means non-violence or non-harm, and is central to the world view and ethics of the Jain tradition. The Jain view of the life-spectrum, which includes, as souls, the whole range of plants and animals, has significant consequences for daily action. It is not just a theory about life, but a way of living. While it is obviously not possible to live without doing some violence to other life forms, Jains are sincerely committed to minimizing their violent impact on the universe around them. In daily life, this means that Jains think consciously about ethical choices and challenges that may be of little concern to others. Perhaps the first and most important is what to eat.

“When people ask about my religion,” says one Jain, “the first thing I usually say is that we are vegetarians. We believe in non-violence, and that includes not killing and eating animals.” For Jains this means eliminating completely from the diet the whole range of animals, for their life has to be taken in order to become food. “Animals are my friends,” as George Bernard Shaw put it, “I don’t eat my friends.” Vegetables, of course, are also living things, but less developed than animals in their full range of sensory awareness. Even so, it is preferable to eat the fruit and produce of plants, such as the apple or the pea-pod, rather than to eat the entire living organism, such as the potato or carrot.

Monastics are much stricter in diet than laity, but every Jain thinks about diet as a matter of spiritual and moral importance. The pages of the Jain Study Circular are filled with articles and letters about vegetarianism. For example, eight year old Ashish from Dayton, Ohio, writes, “In school, I sometimes have hardship in front of non-Jains during lunch. My mother packs me vegetarian food every day since there is always meat in the main meal of the school lunch. The non-Jains sometimes make fun of me, but all I do is to stare back and keep eating. I also tell them that it’s not good to kill other animals for food, and that vegetarianism is healthier for all.”

“How can we practice vegetarianism when we go to parties and to our friends’ houses?” writes a teenager. “It’s embarrassing to ask our hosts about the ingredients of everything. Does it have meat, fish, eggs, animal fat, gelatin, etc.” The Jain community provides both children and adults with a crucial oasis of support and like-mindedness. And the rise of health consciousness in American society as a whole has vastly improved the status of vegetarians. As one letter put it, “We should not have any hesitation in following our vegetarian diet in parties, offices, schools, and picnics. This is our way of life. And science is confirming that vegetarianism is far healthier.”

Diet, of course, constitutes a very small fraction of humanity’s potential for violence. Violence can also be exercised by, for example, business choices. This is another aspect of the ethic of ahimsa with which Jains in America must grapple. Businessmen who own restaurants must carefully choose whether or not to serve meat. Engineers must decide whether to take jobs which involve the design and manufacture of equipment for the military. Scientists and researchers must negotiate between the pros and cons of animal testing. Others must consider the impact of their business ventures upon the environment. And everyone has an eye to cosmetic and cleaning materials that do not use animal ingredients and were not developed through animal testing.

The formulation of public policy is also an area of concern to Jains because of their emphasis on ahimsa. Jains participate in the debates on international conflict, economic fairness, abortion, and civil rights. They have made a special contribution to the religious discourse on the many issues of environmentalism, including the development of the “Jain Declaration on Nature” outlining the Jain perspective on the human community as part of the whole community of life, including plants and animals. In all these contexts, Jains strive to uphold the principle of ahimsa in a world of often inconsistent and opposing priorities.