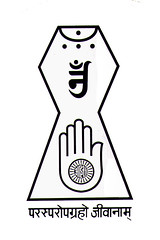 A symbol to represent the Jain community was chosen in 1975 as part of the commemoration of the 2,500th anniversary of Mahavira’s Nirvana. The symbol summarizes much of Jain teaching. Its outline is the shape attributed to the universe by ancient texts. The stylized hand is in a gesture of blessing, and on the palm is inscribed “Ahimsa,” which for many is the essence of Jain ethical teachings. The phrase at the bottom of the symbol states that “All life is bound together by mutual support and interdependence.” Just above the hand there is typically a swastika, which for Jains represents the four types of birth that an embodied soul might attain until liberation: heavenly, human, animal, or hellish. Jains in America, however, sensitive to the association of the swastika with Nazism, usually replace this symbol with the word Om and the symbol for the Federation of Jain Associations in North America (JAINA). The half crescent with a dot at the top of the diagram represents the abode of siddhas, or liberated souls, which in Jain cosmology is situated at the apex of the universe. The dots just below the crescent signify the threefold path by which liberation can be attained: Samyak Darshan, right faith; Samyak Jnana, right knowledge; and Samyak Charitra, right conduct.