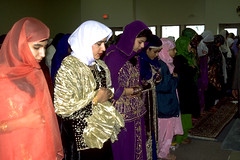 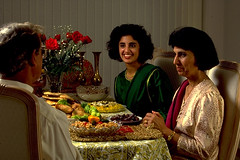 Ramadan is the ninth month of the Islamic lunar calendar. During this month, Muslims observe a complete fast from dawn until sunset. The observance of the sawm Ramadan, considered to be the fourth pillar of Islam, is detailed in the Qur’an:

“Ramadan is the (month) in which was set down the Qur’an, as a guide to mankind,
also clear (Signs) for guidance and judgment (between right and wrong).

So every one of you who is present (at his home) during that month should spend it
in fasting, but if anyone is ill, or on a journey, the prescribed period (should be made up)
by days later.

Allah intends every facility for you; He does not want to put you to difficulties.

(He wants you) to complete the prescribed period, and to glorify Him in that He has guided
you; and perchance ye shall be grateful.” (Surah 2:185, King Fahd trans.)

The fast of Ramadan encourages self-restraint, God-consciousness, compassion, and collective worship. During the daylight hours, Muslims abstain from eating, drinking, and sexual activity, while striving to avoid all evil speech and any bad thoughts or actions. As the Bulletin of the Islamic Cultural Center of New York explained in their 1994 Ramadan issue, the fast must be understood as more than abstention from food and drink, “It also means abstention from the illegitimate use of our minds, our tongues, and our hearts.”

Meals are taken before dawn and after sunset, known respectively as suhoor and iftar. At dusk, many gather to break the fast by eating dates and drinking water, following the example of the Prophet Muhammad. The nights of Ramadan are a time for families and friends, often a festive occasion with special foods. Many mosques (masajid) offer a Qur’anic recitation nightly during Ramadan, such as the Islamic Society of Greater Houston’s Southwest Zone mosque. On Lailat al-Qadr, the “Night of Majesty” on which Muhammad received the first revelation, much of the community gathers in the mosque to listen to the recitation of the Qur’an; many others stay up all night praying and reading the Qur’an at home.

At the end of the month of fasting, Muslims gather in large groups to perform the prayers of Eid al-Fitr, the Festival of Fast-breaking. In Atlanta, the imams of ten local masajid gather to coordinate the observance; in Houston, Muslims gather at the George R. Brown Convention Center in Downtown Houston at a celebration organized by the Islamic Society of Greater Houston (ISGH). Some Muslims, in addition to paying the obligatory zakat al-fitr, a special offering for the needy, perform acts of charity throughout the month, and especially on this day. Portland, Oregon’s Muslim Educational Trust coordinates an annual Eid Toy Drive, collecting toys for needy children. Eid al-Fitr is also a time to visit friends and relatives, and many Muslims celebrate with their families for two or three days. Children receive new clothes, jewelry, toys and other gifts, and parents teach the next generation the importance of following the Islamic obligations of fasting, prayer and reading the Qur’an.