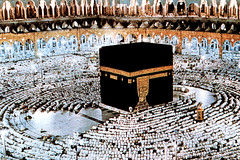 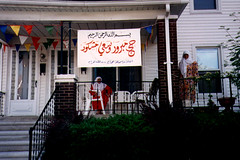 The fifth pillar of Islam is the performance of the pilgrimage (hajj) to Makkah. The hajj has become a powerful symbol of unity within the worldwide Muslim ummah. Annually, over two million Muslims converge in Makkah, Saudi Arabia to visit the Ka’bah, the “house of God” toward which all daily ritual prayers are directed. Every Muslim who has the means should perform this pilgrimage at least once in his or her lifetime. Before pilgrims arrive in the sacred precinct of Makkah, they purify themselves with ablutions and prayer. Then pilgrims don two seamless white garments called ihram, which symbolize both human equality and ritual purity.

Malcolm X described the pilgrimage to Alex Haley in his autobiography:

“There were tens of thousands of pilgrims, from all over the world. They were of all colors, from blue-eyed blonds to black-skinned Africans. But we were all participating in the same ritual, displaying a spirit of unity and brotherhood that my experiences in America had led me to believe never could exist between the white and the non-white.”

Malcolm X’s experiences on the hajj transformed his beliefs on race as well as his understanding of Islam; he changed his name to reflect this transformation, becoming El-Hajj Malik El-Shabazz. Many Muslims add the title “Hajj” to their name after the completion of the pilgrimage.

The actual hajj ceremonies take place in Dhu’l-Hijjah, the twelfth month of the Muslim calendar. The parts of the pilgrimage recall the faith of the Prophet Abraham, Hagar, his wife, and Ishmael, their son. The ceremonies involve circumambulating the Ka’bah seven times; running between the hills of al-Safa and al-Marwa, located just outside the Mosque; assembling at Mount Arafat on the ninth day of the month for the afternoon prayer and the “standing” ceremony, which commemorates both Muhammad’s Farewell Sermon and the last revelation of the Qur’an; stoning the pillars representing Satan; and offering sacrifices of sheep, goats and camels at Mina on the final day, observed throughout the world as Eid al-Adha, the Feast of Sacrifice.

Articles such as “The Performance of Hajj: A Checklist” in ‘Iqra magazine and Al-Hewar’s “The Hajj Journey,” a pull-out chart with graphics, give American Muslims a step-by-step and day-by-day review of hajj activities. A number of American travel agencies offer all-inclusive hajj packages; many of them donate their proceeds to Muslim organizations.

Muslims around the world who are not on pilgrimage share Eid al-Adha, the Feast of the Sacrifice, with the pilgrims in Makkah. The night before Eid is commonly spent in prayer. Then all Muslims who have sufficient funds to do so sacrifice an animal, using some of the meat for their own family and distributing the rest to relatives and the poor. On Eid al-Adha, Muslim communities gather for prayer and hear a sermon, often on obedience and perfect trust in God, following the example of the Prophet Abraham, who was willing to sacrifice his son at God’s command. Eid al-Adha is a four-day celebration, involving the giving of presents and the celebration of special dinners with friends and relatives. In this way, all Muslims participate in the communal experience of the pilgrims in Makkah.

In Makkah, Muslims from all over the world gather for the pilgrimage; in Toledo, Ohio, American Muslims from over twenty different nationalities gather for Eid al-Adha. At the Islamic Center of Greater Toledo, as many as one thousand people participate in the special Eid prayer, which is performed in the morning. Prayer is followed by a brunch, sponsored by the center’s kitchen committee, featuring foods from around the world. The rest of the day is full of activities, with special programs for the children, gatherings of family and friends, and visits to the local cemetery.

Many Islamic relief foundations in the United States provide community and charitable services in association with Eid al-Adha. For example, some Muslim organizations, such as Islamic Relief, run special Eid al-Adha programs, which enable American Muslims to donate money to serve impoverished people around the world. Other programs, such as ICNA Relief organize drop-off points for more affluent Muslims to donate qurbani (or sacrificed) meat for other Muslim families in the community who might be in need.