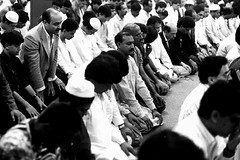 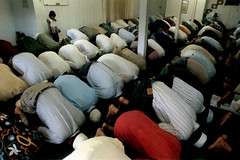 Friday is called Yawm al-Jum’ah in Arabic, meaning the Day of Assembly. Muslims gather for congregational worship during the Friday midday prayer. Jum’ah is not a “sabbath” on which no work is done; rather, Muslims take just enough time off from work or school to attend a service at a neighborhood masjid. The Friday prayer is commanded by God in the Qur’an:

“O ye who believe! When the call is proclaimed to prayer on Friday (The Day of Assembly), hasten earnestly to the Remembrance of Allah, and leave off business (and traffic): That is best for you if ye but knew!” (Surah 62:9, King Fahd trans.)

The Friday prayer is exactly like the ritual prayers, or salat, performed during the rest of the week, except that on Friday the imam or prayer leader delivers a two-part sermon known as the khutbah, with a pause between the two parts of the sermon to allow for a time of personal prayer, or du’a. Whoever the community considers the most learned person in matters of religion can serve as the imam, since there exists no official “clergy” in Islam. Some U.S. communities hire professional imams who have been trained in Islamic universities overseas. The imam usually reads and explains Qur’anic verses relevant to community concerns and encourages the congregation to remember their obligations to God and to each other, offering guidance and advice on how to live as a true Muslim in daily life.

In the United States, where Saturday and Sunday are the standard days off from work, it is often difficult for Muslims to obtain permission from their employers to attend prayers in the middle of a workday. Some Muslim communities have tried to raise awareness of their religious needs in schools, businesses and public institutions, so that they may gather for the central act of community prayer. Less than twenty years ago, many young communities would gather to perform their prayers in local parks, storerooms, or other makeshift locations until they could build a mosque (masjid). In larger American cities, Muslims have developed simple storefront “commuter mosques” close to their places of business so they may pray during their lunch hour. Today, it is not uncommon for American mosques to bring together over 1,000 worshippers for Jum’ah, whether in the Silicon Valley, Manhattan’s upper east side, or at the Islamic Center in Washington, D.C. At these centers, and at other mosques around the U.S., Jum’ah prayers bring together a spectrum of people as one community, united in prayer.