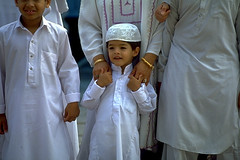 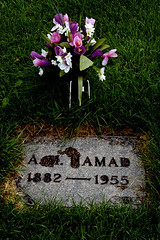 The ceremony that follows the birth of a child takes numerous forms in Muslim cultures around the world, yet all are informed by the idea of a life of prayer and submission to God—from birth to death. The words of the shahadah are whispered to the newborn child at the beginning of life. These same words are declared by a new Muslim when choosing to embrace Islam, repeated in the adhan five times each day, and, ideally, are the last words said or heard by a Muslim before death.

In an Atlanta hospital room, a young African-American couple has just given birth to their first child. The shahadah will be the first words newborn Khadijah will hear. Khadijah’s father washes his hands, gently cradles the child in his arms, and whispers the shahadah into his tiny daughter’s ear. The entire family is gathered together in the small room to usher young Khadijah into the lifetime path of Islam. The path begins with the simple testimony of faith: “There is no God but God and Muhammad is the Messenger of God.”

An imam from New England explains, “In Islam people come into the world naked, without anything, and they leave the same way.” Muslim funeral practices follow the sunnah of the Prophet Muhammad: the deceased must be washed, wrapped in a white cloth, and buried facing Makkah. While the accompanying rituals are sometimes complex, the burial itself is simple: an inexpensive casket, or no casket at all, is used; a simple plaque is preferred to a large headstone.

Early American Muslims faced great difficulties in arranging for proper burial, including the washing and wrapping of the body, the use of a simple casket, and the direction of burial. Today, the Islamic Center of Southern California, like many others in the United States, actively assists community members in these arrangements. The center publishes the detailed brochure “Burial: Preparing this final religious obligation,” which advises, “Even though a casket is not required by Islam, it is required in California.”

In many areas, there are Muslim cemeteries, including the National Muslim cemetery in Cedar Rapids, Iowa, established in 1949. Increasingly, funeral homes and cemeteries now accommodate the religious needs of Muslims, many with special sections oriented in the qiblah direction. California’s Rose Hills Memorial Park and Massachusetts’ Knollwood Memorial Park have sections for Muslims; the United Memorial Gardens in Plymouth, Michigan has two “Islamic Gardens” in addition to their “Korean Garden,” the “Wonders of Michigan,” and “Garden of Apostles.”

Between birth and death, Muslims live out their faith daily through prayer and charity, in deeds and in words. Muslims around the world greet one another with the phrase “assalamu alaykum,” meaning “peace be upon you.” When speaking of the Prophet, Muslims will often follow his name with “Peace Be Upon Him” (abbreviated PBUH) to show reverence; in Arabic, the phrase is “Sallallahu ‘Alaihi Wa Sallam,” (abbreviated SAWS). Other common phrases include “alhamdulillah,” expressing thanks to God, or “bismillah,” which indicates that an act is being performed in the name of God. Many Muslims, when speaking of the future, use the phrase “insha’Allah,” as a reminder that the act will only happen if God wills it. While these phrases are not used universally, they demonstrate one of the ways in which Muslims live out their faith through a life of active submission to God.