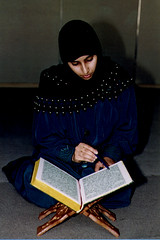 The Prophet Muhammad was an interpreter of religious doctrine for the Muslim community. In the centuries after the Prophet’s death, Muslim rule extended from Spain to the borders of China, and some thought that these rulers had abandoned the ideals of Muhammad’s community at Madinah. During the life of the Prophet, people began to collect and write down hadith, the traditions of the Prophet’s sunnah. Many critics of Muslim rulers were authorities on the sunnah and respected interpreters of the Qur’an. These learned persons, called ‘ulama, developed a system of shari’ah—law, ethics and manners—so that Muslims could follow God’s will in every aspect of life, from rituals to commerce to personal hygiene, in accordance with the example of the Prophet.

The Sunni ‘ulama gradually developed hundreds of schools of law, or accepted interpretations of the Shari’ah, of which today only four remain. Named after the great scholars who founded them, they are the Hanafi, Maliki, Shafi’i, and Hanbali schools. The Shi’ah developed their own schools of interpretation, the most prominent of which is the Ja’fari school. The basic sources of shari’ah are the Qur’an, the sunnah, ijma’, or the consensus of the community, and qiyas, or reasoning by analogy. According to many Sunni legalists, the scholar should not exercise much independent interpretive reasoning (ijtihad) because major issues were resolved by earlier ‘ulama. Most Shi’i schools, however, place a high value on independent reasoning, and the Shi’i scholars, called mullahs, play a much more significant role in interpreting shari’ah in their communities.

The ‘ulama arose as a creative and corrective force, addressing the social problems of their day. They later established traditional madrasahs (“places of learning”) throughout the Muslim world for advanced study of law, philosophy and theology, arts and sciences. These became models for the European university system. One of the most famous is the 10th century al-Azhar university in Cairo, which continues to serve as an educational center for Muslims around the world. Other important madrasahs include Zeitunah in Tunisia and Nizamiyyah in Iraq.

Today, the Muslim world includes the United States, which is rich in diverse practice and opinion, much of which is uniquely American. There is even talk, particularly among indigenous Americans, of developing a fifth Sunni school of law. Professor Dr. Azizah al-Hibri of the University of Richmond Law School notes, “In the United States, to the extent that we have freedom of speech, and that’s quite a large extent, we can really be the vanguard of the modern Muslim movement, the modern Islamic jurisprudence…we can engage in ijtihad, hopefully do it right, and not fear repercussions of an oppressive government.” The modern Islamic age presents both challenges and opportunities, and American Muslims are responding by defining common ground in American and Muslim values.

Recently, questions of the place of shari’ah law in the American judicial system have come up, as relating to Islamic Family Law. Yet it is important to note that shari’ah does not necessarily contradict modern state laws. While the judicial systems in countries that self-identify as Muslim are often based on shari’ah, many Muslims would agree that shari’ah neither contradicts nor must be a part of the state law. Shari’ah includes private family law, for example, which can be compatible with and non-intrusive to a secular government structure.