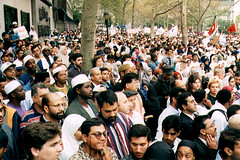 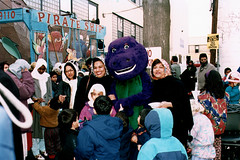 Muslims today listen to and interpret the Divine Word of the Qur’an, and strive to live their lives according to shari’ah, including what are commonly known as “the five pillars.” Muslims also follow the model of the Prophet, and many pursue the inward path of Sufi teachings. These are the facets of traditional Islam largely held in common across time and place in the Muslim world. Today in the post-colonial era, the Muslim world is expanding and experiencing the challenges of both resurgence and worldwide migration.

Some conservative Muslims want to “revive” what they understand to be traditional scholarship to meet the needs of modern life, and to “restore” the glory of classical Islam. The Abbasid period (8th-13th century) often provides the model for these conservatives, who hold fast to the classical schools of law, philosophy, theology, and Qur’an commentary. This traditionalist understanding of Islam has been challenged by a number of tendencies in the last two centuries. Colonial rule introduced Western education, nationalism and certain technologies to much of the Muslim world. Many Muslim “modernist” reformers encourage people to adopt Western philosophy, constitutional law, and modes of dress, and to bring Islamic thought into dialogue with the realities of a new era. Others, following the Sufi model of adaptation to local culture, suggest only a moderate accommodation to Western ideas.

Another type of reform movement, with roots in pre-colonial times, calls for the strict application of shari’ah, opposing Western influences as well as Sufism, traditional philosophy, and art—all of which are deemed to be corruptions of the “pure” Islam of the early ummah. Such reformers often look only to the Qur’an and Sunnah as authorities, but to varying degrees, they ignore the inherent pluralism and the continued discourses of the shari’ah system in favor of a single, reductive interpretation of those sources. Some examples of these movements are the Muslim Brotherhood in Egypt and Sudan, the Wahhabi movement in Saudi Arabia, and the Jama’at-i Islami of Pakistan. More radical Islamic reform movements adopt an ideology of political revolution, along with principles drawn from the Islamic tradition, and many innovations as well. The revolution in Iran led by the Ayatollah Khomeini in 1979 is one example of this type of movement, although it is important to note that these groups are not monolithic, but location-specific.

In the post-colonial context, migration has also reshaped the Islamic world. The number of emigrants from predominantly Muslim countries to Western Europe and the Americas has increased significantly in the past thirty years, with the exodus including highly-educated professionals, laborers, students, and political refugees. There are now thriving Muslim communities and magnificent mosques in Paris, London, and Rome, as well as New York, Vancouver, and Mexico City. Immigrant Muslims, however, have often faced considerable hostility, the product of both racial and religious prejudice in their new homes.

Despite these challenges, the “Muslim world” continues to expand; Islam is thriving in America today. There are over 5,000,000 American Muslims, both immigrant and indigenous. The adage, “Islam is one, Muslims are many” is clearly evident. Muslims of every sect, nationality, and school of jurisprudence are represented in the American community, together creating the ummah of the faith.