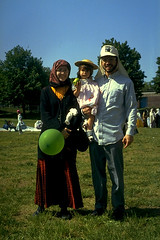 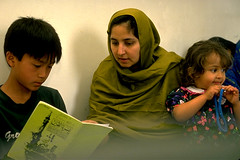 Islam is an Arabic word which literally means “submitting.” Islam is fundamentally an action, a way of living one’s life before God. A Muslim is one who submits to God and aligns his or her life with what God has made plain. Animals are sometimes described as inherently “muslim” because they naturally conform to their God-given nature. A tiger cannot help but be fully a tiger. But human beings are said to have been given a choice; each individual is personally responsible for choosing to follow or to reject God’s will, as revealed in the Qur’an. There is no need for priest or mediator between God and humanity, but each person must decide for themselves to walk according to God’s will.

A cognate of the word Islam is the Arabic word for peace, salaam. Muslims throughout the world greet one another with the phrase: Assalamu ’alaykum, “peace be upon you.”

Like Christianity and Judaism, Islam was born in the Middle East, but is now truly a world religion. There are more than one billion Muslims all over the globe: from Jackson, Mississippi to Jakarta, Indonesia, from Seattle, Washington, to Soweto, South Africa. Given its long history and its rich geographical and cultural diversity, any single portrait of Islam would necessarily be incomplete. The diversity of Islam is a part of and a testament to its strength: its message has proven viable and adaptable across the boundaries of time and culture.

Islam begins with God the Creator, who has sent prophets and revelations to many peoples throughout history, so that they may know the way to live. According to Muslims, God’s final prophet and messenger was Muhammad, and God’s final word the Qur’an. Since the time of the Prophet, communities of faithful Muslims have responded to God’s word, following the path of Islam in each new century and throughout many cultural contexts.