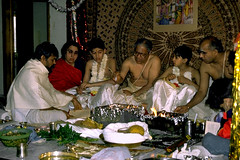 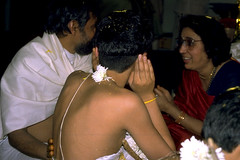 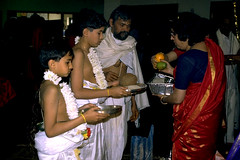 It is Sunday morning at the Sri Venkateswara Hindu temple in Bridgewater, New Jersey. Today, Shridhar and Tejas will receive the sacred mantra that has been whispered into the ear of Hindu boys for over three thousand years. It is called the gayatri mantra: “Let us meditate on the most excellent light of the Sun, the Creator. May it guide and enlighten our minds.” Receiving this mantra is the climax of the special rites of initiation into religious learning called the upanayana. In these rites, the boys are brought to the guru, the teacher, for instruction. They are rites of rebirth into the world of the Vedas. In ancient times, they say, both boys and girls were eligible for the upanayana, but for most of the past 2,500 years it has been primarily a rite for boys. In America today, however, girls are beginning to have the upanayana once again.

The large auditorium room of the Sri Venkateswara temple is crowded with the extended families and friends of the two boys. In the first stage of this rite of passage, Shridhar, who is twelve, and Tejas, who is nine, eat a final meal with their mothers. In ages past, this would really be the last meal the boy would have as a child before leaving to study with the guru and join the world of men. Here in Bridgewater, it is a breakfast of rice cereal and curries, served on paper plates and enjoyed by all the guests and family.

Before the next phase of the ritual begins, the boys and their families move across the hall into the sanctuary where, prostrating fully on the floor, they pay their respects to Lord Vishnu. There the boys are garlanded with flowers and a bit of their hair is clipped, symbolic of the full shaving of the head that would normally take place in an upanayana rite in traditional India.

Returning to the hall again, the boys and their parents sit on the dais at the front of the auditorium where the sacred fire is kindled. The guru chants mantras as he ladles oil into the fire, making its flame burn brightly. Then begins a series of rites in which the boys are outfitted for a life of sacred learning. They are given special garments for their period of discipleship. The guru and the father wrap a new white silk dhoti around the waist of each boy. Most importantly, each receives the “sacred thread,” a cord worn over the left shoulder and under the right arm, signifying one’s qualification for studying the Veda and performing the many rituals. He will wear that thread throughout his life as a student and, later, as a householder. Each boy is then instructed to stand on a stone slab, symbolic of the firmness of resolve that must accompany a life of learning.

The ritual culminates with the bestowal of the sacred gayatri mantra, the prayer to the Sun for its enlightening radiance. It is a prayer that should be uttered every day of one’s life. In this rite of rebirth, the mother, the father, the guru and the son all huddle under the white silk cover while the sacred words are taught, and then spoken for the first time by the initiate.

The final act of the upanayana expresses the new relationship the young boys now have to their families. As newly minted brahmacharis, or students of sacred learning, they come with their begging dishes to their own mothers, requesting alms to sustain them. Their mothers and then all the women of the family respond generously with fruits and rice.

Today the upanayana does not mean leaving home for the ascetic life of a student. However, it does signify a budding seriousness about learning the sacred lore of the tradition and appropriating the tradition of one’s ancestors as one’s own. The upanayana is one of the samskaras, the rites of passage that shape the whole course of life for many Hindus. There are rites for the safe-delivery of a baby, rites of naming, first-feeding, and first hair-cutting. There are samskaras for education, for marriage, and for the maturity of old age. In performing all these rites, Hindus powerfully enact the sanctity that should flower in each and every phase of human life.