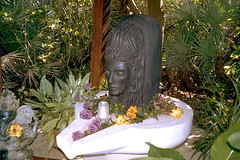 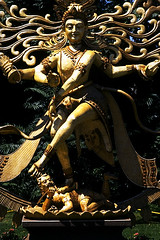 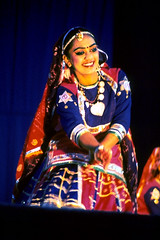 Shiva is the Supreme Lord. He is called Mahadeva, the “Great Lord,” or Vishvanatha, the “Lord of the Universe.” He is seen as both creator and destroyer, the one who pours forth the universe from himself and draws it within, once again, at the end of time. As a Divine dancer, Nataraja, the energy and balance of his dance are a perfect emblem of Shiva’s relentless activity, pouring forth and withdrawing the universe. “He” is also imaged as both male and female, sometimes in an anthropomorphic image: the right half of the body male and the left half female. In abstract form as well, the simple stone shaft called the linga is sometimes seen as a male/female symbol of cosmic wholeness.

In the United States there are several temples with central sanctuaries dedicated to Shiva. For example, the Kashi Vishvanatha Temple, named for Shiva Vishvanatha, the Lord of the Universe, is in Flint, Michigan. It is linked by name with the sacred city of Kashi or Banaras in India. The Shiva Mandir in Ft. Lauderdale, Florida, built by Trinidadi Hindus, places Shiva at the center of the altar, in the midst of a whole host of other deities. Here Shiva is represented both as a cross-legged yogi and in the form of a Shiva linga.

In most American temples, there is at least a shrine to Shiva, often in this linga form. While Shiva has many forms, the linga expresses the Divine transcendence of all anthropomorphic form. According to legend, once the gods argued amongst themselves about which was the greatest. Suddenly the ground burst open and a shaft of sheer light rose from the depths of the earth and shot up through the sky beyond the highest heavens. The gods could not find its source nor reach its top. Finally, Shiva emerged from the light and bestowed a great gift: this fathomless light would become the linga, so that they could worship the divine radiance in this form.

Maha Shivaratri, the “Great Night of Shiva” is the year’s most important celebration of Shiva. It was on this night, they say, that the linga of light was revealed. According to legend, those who worship Shiva on this night, staying awake through the night, are released from many lifetimes of sin.

In New York at the Ganesha Temple, there is an all-night vigil on the night of Shivaratri, with full liturgical rites of bathing (abhisheka) and decorating the linga. To the singing of hymns, the priests pour one offering after another on the linga—milk, yogurt, honey, turmeric. Between each libation, they rinse the image of Shiva completely with copious streams of water. At the end of the long ritual, the curtain is closed while the priests bedeck the linga with the most elegant ornamentation of flowers and then present Lord Shiva in this most beautiful form for worship.

The Hindu community at the Sri Lakshmi Temple in Boston has developed an innovative new tradition for Shivaratri: the “Offering of Dance” (Nrityanjali) to Shiva who is the Lord of Dance. The community room of the temple below the sanctuary is set with an altar bearing a bronze image of Shiva Nataraja. While Shiva is most commonly worshipped in linga form, here he is presented as a dancer, dancing in a circle of fire. The young girls come this afternoon to make their dance offerings. Some are only beginners, practicing and presenting before the Lord the movements of neck, shoulder, and wrist that are so basic to many Indian dances. Some are high school students who have been studying a form of dance called Bharat Natyam for many years. Two sisters from Natick High School, who had their public dance debut, called an arangetram, just a few months earlier, now present a dance offering in the presence of Lord Shiva.

The dances continue throughout the afternoon, with dozens of dancers, young and old, wearing elegant and beautifully bordered dance saris—green with pink trim, beige with red trim, flowers braided into their long hair, pearl-beaded headpieces. All begin and end their dance by honoring Shiva, approaching the altar and gracefully dropping flowers at Shiva’s feet. There is no applause, however, from the delighted audience of some two hundred who fill the hall. For them, this day of dance is not a recital, but a worship service.