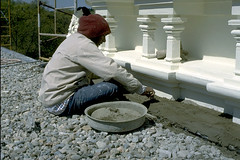 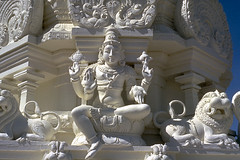 “Growing up in India we took Hinduism for granted. The tradition and the temples were everywhere. But here, those of us in the first generation had the responsibility to make sure our children would be exposed to our tradition. Building a temple became an important priority for us.” These words of Dr. B.N. Somayaji, one of the founders of the Hindu Cultural Center of Tennessee have been repeated in one form or another by Hindu immigrants in virtually every major city in America. In twenty-five years, more than two dozen major Hindu temples have been built from the ground up by first generation immigrants.

Most American Hindu communities began informally, with a small group of people meeting in one another’s homes for holidays. As the community grew, they rented space for more regular meetings and for festivals—the basement of a grocery store in Pittsburgh, the Needham Village Club in Boston, the Unitarian Universalist Church in Nashville. Forming a Hindu Temple Society with a core group of committed members was often the first step to building a temple.

Finding an appropriate site was the first challenge. Many sites were chosen because they were both beautiful and easily accessible to highways. Hilltop sites were chosen for both the temples in Pittsburgh. The natural beauty of the coastal Malibu hills was chosen by the Los Angeles community. The Chicago community looked at over thirty sites before settling on a hilltop in the suburb of Lemont for building the temple to Rama. Nashville Hindus purchased a hillside site in the Bellevue suburbs, and then moved half the hillside to orient the temple properly toward the east!

Most of America’s new temples, especially those built in a South Indian style, are designed by Hindu ritual architects called sthapatis. The Hindu temple represents the whole universe in microcosm, here on earth, called the “abode of God” (devalaya). Because it is the intersection of the divine world and the human, the proportions of the temple are carefully laid out to the Divine symmetry, the parts of the temple corresponding symbolically to the very body of the Divine. In the South Indian style, dome-shaped cupolas rise above the sanctuaries of the gods. Often a tall, decorated, towered gateway called a gopuram rises over the entrance. The ritual architects design the temples according to the Hindu texts called Shilpa Shastras. The religious dimensions are then rendered into working drawings by American architectural firms.

The first ritual act is the bhumi puja, in which worship is offered to the earth herself. This may be performed at the time the community first gathers at the new site. At the time the ground is broken for the temple, the vastu puja is performed at the temple site itself. In this ceremony, the ritual dimensions of the temple are laid out and the symbolic foundation stones are placed. Most American temples are built in stages. At first, the building may be of simple cement block. The towers (vimanas) that rise over the main sanctuaries of the gods look, initially, like stair-stepped chimneys of cement block. The brick articulation, cast-cement decoration, and intricate carving that are distinctive to Hindu temples is done by craftsmen from India called shilpis. Eventually, the entire temple exterior is alive with gods and decorative symbolic forms. Finally, it is given a unifying coat of white paint. For some temple styles, the culmination of the process is building the rajagopuram, the “royal gateway,” over the main entry to the temple.

Not surprisingly, American Hindu temples are built with spacious areas for a community kitchen and dining room. When the sanctuary is complete, the construction of an auditorium and community hall for weddings, for dance, and for music is a high priority. The effort that goes into all this building activity also serves to create a new sense of community among the Hindus of an American city. Interestingly, most of America’s temple-builders would probably not have become active sponsors of temples had they remained in India. Most came to America for professional reasons. Many say that they thought of themselves as secular and confess to being far more religious as they have become involved with the Hindu temple community here in the United States. Invariably, the temple builders have devoted long hours to discussing the vision of the temple with the ritual architect, planning with the community, and even supervising the construction.

The temple enables the American Hindu community both to transmit cherished traditions and to create them anew in a new place. A Chicago area woman wrote at the time of the opening of the Hindu Temple of Greater Chicago: “Building and consecrating a temple is part of the process of understanding and explaining our religion to ourselves, our children, and our community. The temple and temple-oriented religion are also important for us because they represent the only way we have of transmitting received tradition in a foreign setting. Without minimizing the significance of the inward or contemplative aspects of our religion, we must acknowledge the value of the ritual experiences, especially for the second and third generations who have no memory of experiences in the old country to fall back upon. The temple can be a place for us both to remember tradition and create it anew.”