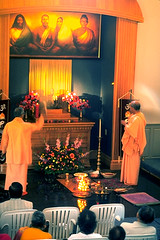 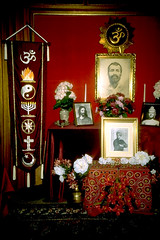 Throughout its long history, the Hindu tradition has shared common soil with other religious traditions. India is the homeland of Buddhism, which flourished in India for over 1,500 years from the time of the Buddha in the sixth century BCE until about the eleventh century. The Jain tradition of monks, nuns, and laity, which began about the same time as the Buddhist tradition, continues to flourish in India today. The Christian tradition also has ancient roots in India, where Christians trace their origins back to the Apostle Thomas in the first century. The Jews have an old community started by traders in the southern state of Kerala and in Bombay. The Parsis are followers of the Zoroastrian tradition with roots in what is now Iran.

Beginning in the eleventh century, the Muslim tradition took root in India and developed a distinctive Indo-Muslim culture. Before the partition of India and Pakistan in 1947, about one third of all Indians were Muslims, and even now about 13 percent are Muslims. Finally, the Sikh tradition began in northwest India in the sixteenth century with the teaching of Guru Nanak and has evolved into a vibrant and distinctive religious community. With the British Empire, beginning in the late seventeenth century, came Protestant Christianity and the mission movement. As commerce developed between India and the West, currents of intellectual and religious thought traveled back and forth as well.

Many Hindus today insist that the whole multi-religious context of India is basically “Hindu.” By this they mean a tolerant cultural milieu, defined not by a creed, but by a broad ethos or world view. On the whole, the Hindu world view has been one of harmony, not conflict. This Hindu milieu has absorbed many a people and tradition, repeatedly affirming the integral oneness of Reality and the multiple perceptions of that same Reality. While Muslim, Sikh, and Christian communities have been adamant in distinguishing themselves from this broad contextual “Hindu” background, none has remained uninfluenced by it.

The One and the many. No other theme in India has played so constantly, like a continuously evolving raga, a musical scale with a multitude of variations. No culture on earth has developed as complex an understanding of human and divine “manyness” as Hindu India. The Hindu “solution” to diversity, however, has never been that of the melting pot. It is, rather, that of the kaleidoscope in which the distinct pieces continually fall into patterned wholes, over and over, with each twist of the wrist. Diversity is preserved and valued in a flexible and dynamic pattern of interrelation.

This pluralism is one of the foundational contributions of the Hindu perspective. Difference, in this view, is not a threat to oneness, but constitutive of oneness. The whole is made up of difference, its many parts not isolated but in interrelation. To say “this is the one and only” may be a marker of importance to other cultures. Hindu India, however, has long taken a different measure of the meaning of plurality.