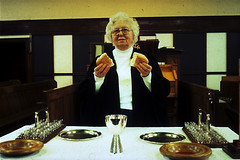 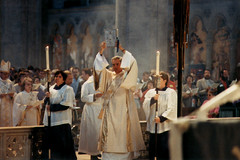 The central rite of the Christian tradition is the sharing of a symbolic meal of bread and wine. As in many religious traditions, this act of eating together both creates and sustains the community, just as family meals sustain the life of the family. Sharing in the fellowship of the table was central to the ministry of Jesus, and it was a fellowship he shared not just with an “in-group,” but with the sinners, outcasts, and prostitutes of society. It is not surprising, then, that a ritual meal became central to the community of Christ’s followers. St. Paul wrote in his letter to the church at Corinth, “Because there is one bread, we who are many are one body, for we all partake of the one bread.” (I Corinthians 10:17)

The most common name for this rite is the Eucharist, which means “thanksgiving” in Greek. It comes from the account of Jesus’ last supper with his disciples before his crucifixion in which he gave thanks to God for the bread and wine before sharing it around the table. The words of the rite repeat that story: “On the night he was betrayed, Jesus took the bread and, when he had given thanks, he broke it, saying, ‘This is my body which is broken for you. Do this in remembrance of me.’” Similarly, when he gave thanks for the wine and blessed it, Jesus said, “This cup is the new covenant in my blood. Do this, as often as you drink it, in remembrance of me.” (I Corinthians 11:23-25) The language of this last meal with his disciples is recited in the rite of the Eucharist, as Christians of every generation take their place at the table.

The “communion” of those who share the bread and wine is not only with one another in the community of the church, but with Christ who is, according to Christians, present with them in this fellowship. For all Christians, these elements are a holy remembrance of Christ. But what does it mean for Christians to eat the “body” and drink the “blood” of Christ? Are the bread and wine symbolic of Christ? Do they become consecrated as the “real presence” of Christ? Is Christ’s presence in the elements of bread and wine, or is his presence in the community, among those who gather in His name? The discussion of the profound mystery of the Eucharist continues among Christians, even today. Whatever differences Christians may have in interpreting the Eucharist, this rite is of central significance to Christian congregations throughout the world and across the denominations. The “bread of life” sustains the spirit, just as the bread of the earth strengthens the body.

In most Protestant churches, this rite, called Holy Communion or, sometimes, the Lord’s Supper, is not observed weekly, but reserved for special days during the church year. In Episcopal, Disciples of Christ, and Lutheran churches, however, the Holy Communion is most likely celebrated every week. Roman Catholic churches celebrate this rite of Holy Communion, called the Mass, every day. In most Roman Catholic churches there are several Sunday and daily Masses to accommodate the needs and schedules of the parishioners. In Orthodox Churches, the rite is also observed daily and weekly and is called the Divine Liturgy.

In Catholic and some Protestant denominations, young people will study and prepare themselves before taking their “first communion,” which constitutes full entry into the life of the church. Sometimes when a couple is married, they will take communion together as part of the sacrament of marriage. Priests and pastors will often bring the consecrated bread and wine to the sick and dying.

However often or in whatever way this rite is observed, it is the doorway to the heart of the Christian community. Within it, the whole story of Christianity is contained and the whole drama of the climactic events of Christ’s death and resurrection are enacted. The Eucharist is, in the words of the Episcopal communion rite, “the gifts of God for the people of God.” Having been nourished by these gifts, the celebration ends with a mission imperative: to go forth into the world for reconciliation and for service.