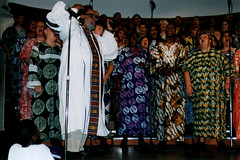 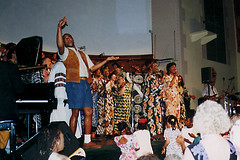 African-American religious experience has always been sung, and that singing has given rise to one of America’s most distinctive and powerful traditions of music—gospel music. The great spiritual and gospel singer Mahalia Jackson, recalling the church of her childhood, said, “These people had no choir and no organ. They used the drum, the cymbal, the tambourine and the steel triangle. Everybody in there sang, and they clapped and stomped their feet, and sang with their whole bodies. They had a beat, a rhythm we held onto from slavery days, and their music was so strong and expressive. It used to bring tears to my eyes.”

The evolution of gospel music is deeply rooted in the musical forms of generations of African slaves. In the form that came to be called the “ring shout,” they combined song and dance in the rhythmic pulse that later came into the life of the Holiness and Pentecostal churches of the late nineteenth century, with shouting, clapping, and ring dancing after the sermon. The “call-and-response” pattern of communal singing became the distinctive antiphony of leader and the congregation, surging through African-American spirituals and becoming the driving rhythm of gospel music.

Black gospel music was born of the spiritual intensity of camp meetings and rural congregations that sang from their hearts, often in four-part harmony. But according to the scholars who have documented the emergence of gospel music for the Smithsonian Institution, it developed its distinctive style and repertoire as African Americans moved from rural to urban communities. It is largely an urban and twentieth-century phenomenon. Amidst the challenges, the opportunities, and the heartaches of the urban environment, African Americans gathered in fast-growing urban churches. Bernice Johnson Reagon, who edited the Smithsonian volume, We’ll Understand It Better, By and By, writes, “Into new urban communities, we brought dreams of change; we also brought as much of the past as we could carry—traditions that provided solid ground for uprooted families in strange, often cold, environments. The sound of Black America expanded to embrace this reality. The new dimensions of this expansion are most evident in the development of the urban church music that became known as gospel.”

In the urban church context, the powerful, improvisational forms of black congregational singing developed a new volume, a new style, and new use of instrumental accompaniment. As Reagon writes, “The call-and-response form flourished in the new genre. Songs such as ‘In the Morning, When I Rise’ rocked churches with a strong leader giving the call—’In the morning’—and the congregation thundering the response—’When I rise.’”

In the first half of the twentieth century, gospel music was also shaped by the emergence of powerful composers. Charles A. Tindley was a Philadelphia Methodist preacher whose hymns, such as “Stand By Me” and “I’ll Overcome Someday,” became popular staples of a new black gospel music in the early decades of the twentieth century. Lucie E. Campbell composed gospel songs that became classics of the repertory of the National Baptist Convention. And Thomas A. Dorsey’s “Precious Lord, Take My Hand,” written after the death of his wife and daughter, brought a blues style into the black gospel repertory. The “Chicago school of gospel” grew up around Dorsey, as Chicago became a new power-center of gospel writing, publishing, and performing in the 1930s and 1940s.

Today the energy and rhythm of black gospel music is heard not only in the life of countless churches, but in touring gospel choirs and quartets, and in sounds, pulses, and improvisation of gospel-style popular music. Stars like Aretha Franklin have infused the world of entertainment with the “soul” of gospel. The Gospel Music Association hosts the annual Dove Awards and makes inductions into the Gospel Music Hall of Fame. And yet this music is still centered, heart and soul, in communities of faith, in the Christian churches that are the wellspring of gospel music.

God is a Spirit

God is a Spirit, We worship Him.
Just like we making glory
And I see Him.
There is a God, true living God
Almighty God.

God is a Spirit, We worship Him.
Just like we making glory
And I see Him.
There is a God, true living God
Almighty God.

God is a Spirit, We worship Him.
Just like we making glory
We cannot see Him.
There is a God, true living God
Almighty God.

God is a Spirit, We worship Him.
Just like we making glory
We cannot see Him.
There is a God, true living God
Almighty God.