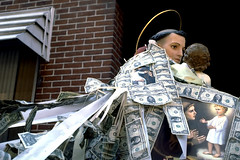 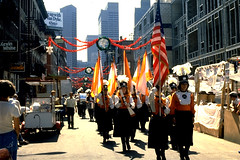 On a steamy August day, the life-sized image of St. Anthony bobs through the streets of Boston’s North End, carried on the shoulders of young men, second- and third-generation Italian-Americans. For eleven hours, the procession moves through the streets, stopping at homes and businesses along the way, where the faithful garland St. Anthony with streamers of dollar bills. Five bands accompany him on his way, and hundreds of people follow along. Here and there they stop at a temporary shrine set up on the street. For three days and three nights the narrow streets are filled with people, music, food, and devotion.

This festival, called a festa, is said to be the largest Italian festival in New England. For St. Anthony’s festa over 100,000 people crowd the narrow streets of the Italian North End. Street peddlers sell banners, hats, Italian flags, and t-shirts. The multitude of food booths fill the air with the aromas of pizza, fried dough, sausages, and pasta. The oompas of the marching bands mingle with the new sounds of electric guitar and amplified percussion.

Boston’s North End has been an Italian district since the late 1800s. For a few decades, Italians shared this neighborhood with Eastern European Jews, who gradually moved to Roxbury, Dorchester, and Mattapan. In 1873, the Italian community built its first church, St. Leonard’s, which still continues weekday masses in both Italian and English. In the basement of St. Leonard’s is the permanent shrine of St. Anthony of Padua.

These Italian Catholics arrived, on the whole, after the Irish had already settled and established Roman Catholic parishes. But Italian traditions were different, and one difference was the festa, the outdoor street festival. In addition to the festa of St. Anthony, the North End has annual festivals of St. Jude, St. Agrippina, Madonna della Cava, and many others. The largest, however, is still the festa of St. Anthony, which has been celebrated now for over ninety years.

St. Anthony’s festa is organized by an all-male fraternal organization. Scholar Robert Orsi, who has studied a similar festa of Madonna del Carmine in New York City (The Madonna of 115th Street), has shown that these fraternal “mutual aid” societies were one of the first forms of organization among Italian immigrants. Even before they built churches, men from the same home town or area of Italy gathered to support one another, to seek the protection of patron saints from home, and to assure each other of mutual aid should any tragedy befall them in the new land. They worried especially about the possibility of dying far from home, with no one to see to a proper funeral and burial. The distinction between the mutual aid society and the church is still evident today. The society’s festa of St. Anthony is observed in August as a great public festival, while the St. Anthony Festival at St. Leonard’s Church is observed at the church on the second Sunday in June, as close as possible to the official St. Anthony’s Day, June 13.

St. Anthony is honored by both Portuguese and Italian immigrants, who brought their devotion to him with them to America. He is widely revered for his protection of sailors and fishermen and for his service to the poor. St. Anthony is depicted carrying the baby Jesus in his arms and is honored for his benedictions to expectant mothers. Perhaps above all, devotees of St. Anthony seek his aid in finding lost or stolen articles. St. Anthony died in the thirteenth century in Padua, Italy, where even today a major shrine attracts pilgrims from all over the country.

There are Italian street festivals in many American cities and towns. In Providence, Rhode Island, parishioners of St. Anthony’s Church carry a huge image of St. Anthony through the streets. The image is said to weigh as much as three hundred pounds. In Allentown, Pennsylvania, streets are blocked off for the street fair called the “Festa Italiana” at the time of St. Anthony’s Day in June. Sicilians in Buffalo, New York celebrated the Feast of Our Lady of Miracles of Mussomeli, a festa observed there for nearly eighty-five years. While many would call these festas more cultural than religious, it is still true that the loyalty, the participation, and the devotion they display continue to generate a sense of community for Italian-American Catholics.