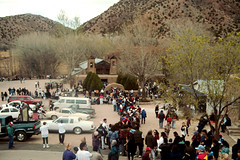 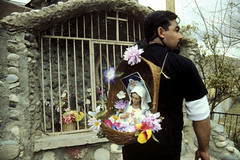 The Santuario de Chimayó is an adobe church nestled in the dusty hills of New Mexico north of Santa Fe. Each year during the week before Easter, the secondary roads winding through these hills toward Chimayó are filled with pilgrims. Some may walk only the seven miles from Espanola, others thirty miles from Santa Fe. A few will have walked more than seventy miles, all the way from Albuquerque. It is estimated that more than 60,000 pilgrims come to Chimayó during Easter week, making this the largest ritual pilgrimage in the United States.

Chimayó is a place of healing, sometimes referred to as the “Lourdes of the Southwest,” after the healing shrine of Our Lady of Lourdes in southern France. The Pueblo Indians of this region have long known Chimayó to be a sacred place of healing, famous for its restorative mud springs. Then it became part of the world of early Spanish Catholicism. According to legend, one year on Good Friday, early in the 1800s, a villager found a cross buried in the earth in this place. He brought the cross to his local church, but the cross disappeared. Once more the villager found it in the earth at Chimayó. The astonished villagers took this as a sign to build a church, which was completed about 1815. Hispanics and Native Americans have come here on pilgrimage for over a century.

Today’s Good Friday pilgrims wait for hours to make their way into the sanctuary of this simple, adobe church. They offer prayers, light candles, receive words of blessing. The final destination of these pilgrims, however, is not the church sanctuary, but a small chapel adjacent to the sanctuary. Here pilgrims enter only two and three at a time, ducking through a low doorway.

On the floor is an open pit of earth just over a foot wide. It is said to be healing earth, tierra bendita. Pilgrims touch it reverently to their heads and limbs, perhaps gathering a bit of it in a plastic bag, before moving on to make room for a few more of the thousands who wait their turn. The walls of the room just outside this chapel are covered with the canes and crutches of those who have been healed here at Chimayó. Tacked up among them are notes of thanksgiving, testimonials, and little paintings called milagros, “miracles,” depicting some particular story of grace and healing. “It is the faith, not the earth, that heals,” says the priest at Chimayó.

Like pilgrimages the world over, the journey is as important as the destination. These Good Friday pilgrims are called penitentes; their “penitential” pilgrimage involves taking on some hardship, some deliberate suffering. As the priest puts it, “In coming to Chimayó, people participate in Christ’s journey to Calvary.” Some penitentes do this quite literally, carrying homemade crosses along the road, some of them as much as eight feet tall. One of them, a young man from Santa Fe, carried a cross to Chimayó, hoping for personal transformation on this pilgrimage. “I’m kind of the bad seed of the family,” he told a reporter from the Albuquerque Journal, “and no one could believe I was going to do this, and do it alone. But I needed some direction in life and I came to ask God to help.” For others the hardship is in the long journey, like that of the man who walked all the way from Albuquerque for the healing of his church community. Still others make the last mile of the journey on their knees, like the mother who came with prayers for her son, who has been diagnosed with HIV. Inside the church at last, pilgrims might light a candle and leave a note with a prayer request next to the melting wax of the candle stand: “Pray for my husband’s drinking problem,” “Please pray for my daughter’s baby.”

This pilgrimage has gained increasing popularity in the past three decades. The Hispanic Catholics who come from all over the Southwest for generations have been joined by a wide range of Christians, Catholic and Protestant alike, who are just beginning to discover the power of pilgrimage, and even by the Sikh, Buddhist, and New Age populace of this part of New Mexico. In 1983, for the first time, Native ceremonial runners carried sacred earth from Chimayó to the “Atomic City” at Los Alamos to demonstrate religious opposition to the nuclear weapons that could destroy the earth. This was the beginning of a new era of ceremonial running that has linked Chimayó to the peace movement. Since the 1990s, Peace Prayer Day, sponsored by the Sikh Dharma, has taken place in the mountains above nearby Española and begins with the cross-country journey of ceremonial runners who start at Chimayó long before dawn.