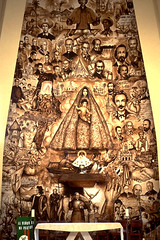 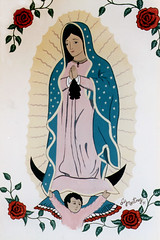 From all over the world, immigrants to the United States have brought with them their devotion to the Virgin Mary under her many names and in her many local forms. From Poland has come devotion to Our Lady of Czestochowa, whether at a local church in Madison, Illinois or in a large urban parish in one of Chicago’s Polish Catholic neighborhoods. Those who fled from Cuba built the shrine of Our Lady of Charity, the patroness and protector of Cuba, overlooking the sea in Miami. She stands in a beautiful, large, triangular shrine, built to replicate the mantle under which she gathers and protects her children. From southern Italy have come regional and local Madonnas, such as Madonna del Carmine in what was formerly the Italian Harlem area of New York City. For many years, this “Madonna of 115th Street” held the Italian community together as it gained its footing in America.

These and many other manifestations of the Virgin Mary are gathered together in the immense space of the National Shrine of the Immaculate Conception in Washington D.C. As early as 1846, Mary was acclaimed patroness of the United States. The dedication of this National Shrine in 1959, after four decades of construction, is said to have been the largest ecclesiastical ceremony in America’s history. The primary shrine replicates the Grotto at Lourdes in France, where Mary, as the Immaculate Conception, is said to have appeared to a young woman, Bernadette Soubirous. The side altars contain images of the Virgin as honored in the United States by immigrants from around the world. From Ireland has come devotion to Our Lady of Knock, from Portugal devotion to Our Lady of Fatima. More recently, there is a shrine to Our Lady of Vailankanni, honored by Catholic immigrants from South India.

However, one manifestation of the Virgin Mary belongs uniquely to the Americas: the Virgin of Guadalupe. According to tradition, she appeared in 1531 to the Aztec convert Juan Diego, scarcely a decade after Cortéz first laid eyes on the splendid lake city of Tenochitlán. The story of Juan Diego’s vision was first recorded in Nahuatl, the indigenous language of the Aztecs. The Virgin Mary appeared to Juan Diego on the hill of Tepeyac, which had been sacred to the goddess Tonantzin. Juan Diego asked her for a sign, for who would believe a poor Indian if he did not have a sign. She told him to gather roses, blooming on the hill out of season. And when he presented his cloak full of roses to the bishop, the image of the Virgin was imprinted in delicate detail on his hand-spun cloak. She was not a white Spanish Madonna, but an indigenous Indian Madonna. In the four hundred years since her appearance, the Virgin of Guadalupe has become a national symbol for Mexico. Under her banner, Hidalgo raised the cry for Mexican independence. The cloak of Juan Diego, imprinted with her image, is still honored above the altar in the huge basilica of Our Lady of Guadalupe in Mexico City.

At the first appearance of the Virgin of Guadalupe, the Rio Grande was only a river. It was not until some three hundred years later that it became a border. The first shrine to Guadalupe in what is now the United States was built in Santa Fe in the 1790s. It is a thick-walled adobe church called the Santuario de Nuestra Señora de Guadalupe, still standing today. Devotion to Our Lady of Guadalupe spread throughout the Southwest. Now, two hundred years later, with the new influx of Mexican-Americans, devotion to the Virgin of Guadalupe has become a popular part of American Catholicism in parishes throughout the country. Her altars in places like St. Pius’ parish in Chicago or St. Peter’s in San Francisco flicker with a multitude of candles. December 12, the day of her appearance, is observed widely as her feast day. Even as more than a million pilgrims come to her basilica on the outskirts of Mexico City, Catholics in Dallas and Chicago sing, “From heaven on a beautiful morning, La Guadalupana, La Guadalupana, La Guadalupana came to Tepeyac!”

In 1910, the Vatican declared that Our Lady of Guadalupe was not only the Patroness of Mexico, but the Patroness of all the Americas. Today as Chicano culture becomes a more visible and vibrant part of the culture of the United States, Catholic devotion to the Virgin of Guadalupe becomes ever more widely shared.