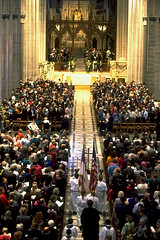 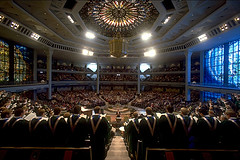 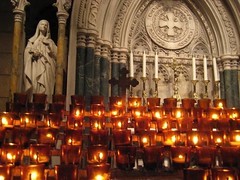 The church is both a building and a community, a space and a spirit. The spirit of community is created and expressed ritually when the community gathers. “The peace of Christ be with you,” says the minister, smiling broadly and opening her arms toward the congregation. “And also with you,” the people respond. “Let us greet one another with a sign of peace,” she beckons. What follows in churches, all across America, is an informal moment embedded in the midst of a formal Sunday service, when members of the church turn toward one another with a warm handshake, a hug, perhaps even a kiss, and a word of peace. “The peace of Christ be with you,” they say. For a few moments, the rows of worshippers, seated side by side, break into a buzz of greeting and embrace. It is this spirit of shared commitment to Christ and to one another that makes this gathering for worship a “church.” Above all else, the church is a community of people.

As for the church building, there are as many kinds of American churches as there are church communities and regional cultures. The Southwest has its old adobe churches, the Rocky Mountain states their log-cabin churches. In urban areas, there is the storefront church with its Hispanic Pentecostal congregation, and the Catholic urban mission, operating out of a former movie theater, its marquee now announcing mission programs. The elegant austerity of the old New England Congregationalists still persists in the countless white clapboard churches, steeple pointing heavenward, the interior unadorned. Other churches, like the National Cathedral in Washington D.C., preserve a Gothic style reminiscent of the cathedrals of Europe. They create an atmosphere of awe, majesty, and mystery, the sanctuary itself lifting the attention of the worshipper toward the heavens. There are modern-day cathedrals as well, such as the Crystal Cathedral in Anaheim, California, a glass and glitter American-style cathedral within a few miles of Disneyland. Built by televangelist Robert Schuller in 1980, the Crystal Cathedral was bought by the Roman Catholic Diocese of Orange in 2010 after Schuller’s church—which claimed 10,000 members at its peak—filed for bankruptcy.

Especially in the past twenty years, many large old urban churches have become home to multiple congregations. Some call these congregations “nesting” churches, new immigrant church communities that make their nest, so to speak, with the structure of another church. There are tens of thousands of such churches today. A Chinese-speaking congregation shares space with an English-speaking United Church of Christ in Flushing, Queens. They worship separately, the English-speaking congregation in the sanctuary, the Chinese in the fellowship hall; the two congregations meet for the social hour after the services. In other multi-congregational churches, Korean or Samoan congregations might use the sanctuary for a service on Sunday afternoon. In this way, America’s newest immigrants have started a multitude of Vietnamese Catholic, Korean Presbyterian, and Chinese evangelical churches.

Every church building contains more than a sanctuary. There are kitchens and fellowship halls, classrooms and libraries. In the late twentieth century, however, an entirely new and even more comprehensive church “campus” emerged with the advent of huge “megachurches.” Entering Second Baptist Church in Houston, for example, one might feel more like one had entered a large office complex than a sacred space. There are escalators and closed-circuit television monitors. The enormous sanctuary seats more than a thousand people and the facilities include a fitness center, a bookstore, and a college preparatory school for grades K-12. The Woodway campus, one of five branches, also hosts a restaurant featuring indoor and outdoor seating. Here both the church building and the community experience have come to embrace more and more of the members’ day-to-day lives.

The Willow Creek Community Church in South Barrington, Illinois, takes a further step. While churches have traditionally served a town or neighborhood called a parish, the sprawling suburbs of today’s cities have produced what is now called a “commuter” church. By design, the 141-acre South Barrington campus looks more like a community college than a traditional church. Gone are the pews and the chancel. Entering this sanctuary is more like entering an auditorium where over 4,500 people can be seated in theater-style seats, focused not on the altar, but on a stage where a singing group leads the community in easy-to-learn Christian music. The entire “church experience” appeals to many people who might otherwise not be attracted to church at all. Willow Creek was originally developed to attract residents of the suburbs. In response to the fact that members often drove more than an hour to reach the campus, Willow Creek now includes five suburban campuses, a Spanish-speaking “regional” at its South Barrington location, and an urban campus in Chicago.