Baptism by Water and Spirit 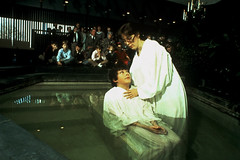 Baptism by Water and Spirit

“Well, this is the end of the road,” said Pastor Chuck Smith of Calvary Chapel to Gary, a new candidate for baptism, looking him straight in the eye. The two of them stood in the sea, waist deep in the salt water, at the Corona del Mar Beach. Gary smiled and said, “Hold me down a long time, Pastor. I’ve got a lot to bury.” Under he went, submitting the weight of his body to the firm arm of Pastor Chuck. Three times he went into the water. “I baptize you in the name of the Father, and of the Son, and of the Holy Spirit,” said Pastor Chuck. When he came up for the third time, Gary was a baptized and reborn Christian, the fortieth to be reborn through the rite of baptism that morning.

These baptisms on the beaches of the Pacific began in the early 1970s when Pastor Chuck Smith and a small group of Christians launched a ministry to the young dropouts of the counterculture of the 1960s. Baptism is, as Gary knew, a rite of death and rebirth, the symbolic death of the old person and the rebirth of a new Christian. These young hippies, who came to be called the “Jesus freaks,” were drawn to Christianity by Pastor Chuck’s energetic ministry, combining biblical preaching and study with contemporary Christian music. Pastor Chuck’s Calvary Chapel in Costa Mesa, California, grew from a small congregation of 25 to huge congregation of 1,600, gathering under a circus tent, sitting on folding chairs.

Being “born again” through baptism is as old as the Christian tradition. Jesus was baptized by John the Baptist in the River Jordan. Baptism in the sea is especially evocative of sinking back into the formless waters of the deep that preceded the formation of the created world. The candidate for baptism is immersed in these waters again, and emerges renewed. Baptisms may be in the sea, in rivers, in lakes, or in a baptismal tank built within the church. In many Christian churches, however, baptism consists in being sprinkled or anointed with these waters, rather than immersed in them. Whether by immersion or anointing, the ritual of baptism is not so much a remembrance of Christ’s baptism in the River Jordan, as a remembrance of Christ’s death and resurrection. It is a death and a rebirth. As such, it is the rite of initiation into the Christian community.

Churches not only baptize in different ways, but also at different ages. In many churches, infant baptism is practiced, a rite which includes the formal “naming” of the child, and the symbolic anointing of the child with water, a rite which is often called “christening.” The parents and, in some traditions, the godparents, pledge to nurture the child in the Christian faith, looking forward to the time when he or she, as a young adult, will personally reaffirm the faith at the time of what is called “confirmation.”

However, in Baptist churches and those following the Anabaptist tradition infant baptism is rejected. Baptists insist that baptism into the Christian faith must come only when a child is old enough to make his or her own decision. Other Protestants, especially evangelicals, postpone baptism to the age of decision, with the conviction that this important rite should be preceded by a conversion experience, in which the individual comes to accept Christ as one’s own Lord and Savior and desires the rite of baptism as a mark of this transformation. Whether done at birth or at a time of personal decision, the experience of baptism marks one’s entry into the church community and one’s new identity as a Christian.