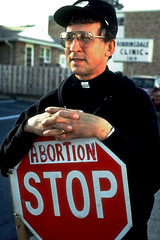 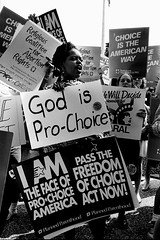 For more than three decades, Americans have been deeply polarized over the issue of abortion. While the debate on abortion involves secularists as well as people of every religious tradition, the issue has become particularly acute among Christians because of strong views on both sides. Generally, the debate has been cast in terms of “pro-life” views and “pro-choice” views, but it is clearly a much more complex issue for Christians.

The legality of abortion was confirmed in 1973 when the United States Supreme Court struck down a Texas statute that prohibited abortion procedures, no matter how medically urgent they might be. This decision, commonly referred to as Roe v. Wade [410 U.S. 113 (1973)], is the most important legal milestone in the debate. In its decision, the Court acknowledged that it cannot rule as to when life begins, since even those in medicine, theology, and philosophy have no consensus on this matter.

Christian pro-life advocates insist that all human life is sacred and that human life begins at the moment of conception. From the point of view of pro-life Christians, America’s aborted fetuses are unborn babies who are killed through the process. As Pope John Paul II put it, “The legalization of the termination of pregnancy is none other than the authorization given to an adult, with the approval of an established law, to take the lives of children yet unborn and thus incapable of defending themselves.” The most vocal opposition to abortion has come from the Roman Catholic Church and from evangelical Christians, including activist groups such as Operation Rescue. The presumption is that there should be no abortion at all, a general principle to which some liberal pro-life advocates might carve out a series of exceptions, such as in the case of rape, incest, known deformity, or grave danger to the life of the mother.

The Religious Coalition for Reproductive Rights (formerly, the Religious Coalition for Abortion Rights) brings together Protestants, Catholics, Jews, Unitarian Universalists, Muslims, Hindus, and Buddhists who want to make clear that pro-life voices are not the only religious voices in the abortion debate. Describing their position as people of faith, the RCRR seeks to “support individuals in making their own moral decisions and stand with them as they struggle with the very real complexities of life.” The Coalition acknowledges that, “while people of all religions anguish over abortion, most feel this is a moral decision, one a woman must make for herself in keeping with her faith, beliefs, conscience, and her own personal situation.” Another voice in the debate is Catholics for Free Choice, an organization of Catholics who are both pro-choice and involved faithful Christians in the life of their parishes and communities. Catholics for Free Choice, founded in 1973, lobbies for women’s reproductive rights in Congress and legislatures. Results from a 2012 survey conducted on behalf of the organization showed that 60 percent of Catholic voters think abortion should be legal.

At the extreme, pro-life activists have included people who have engaged in a series of violent attacks on abortion clinics and doctors. In 2009, Dr. George Tiller, one of only a few doctors in the United States to perform abortions into the third trimester of pregnancy, was killed inside Reformation Lutheran Church in Wichita, Kansas where he was a member. Tiller had been shot before, in 1993, and his abortion clinic had been bombed in 1986. Another physician, Barnett Slepian, was killed in Buffalo in 1998, preceded by two other doctors in northern Florida and abortion clinic workers in Boston between 1993 and 1995. Despite these incidents, the vast majority of people and organizations within the pro-life movement do not condone the use of violence. Many are vocal, however, about the violence associated with abortion procedures, especially in the case of partial birth abortion.

In a decision that presumably involves a woman and a man, a doctor, and a fetus, the question of whose “voice” counts is highly charged. Pro-life activists often suspect the pro-choice movement of treating abortion lightly in the context of a so-called “sexual revolution” that takes sexual encounters all too lightly and where abortion is considered a method of birth control. According to this view, pro-choice advocates do not to grant any recognition or moral status to fetal life at all, effectively leaving the life of the fetus completely out of the process of ethical decision-making. The pro-choice side, however, often sees pro-life advocates as concerned only with the life of the unborn and callous about the lives and opportunities of those same children from the moment they are born. Pro-life advocates appear to give virtual sovereignty to the fetus, blind to the stark realities of poverty and human hardship, while ruling out abortion regardless of the circumstances of the pregnancy or the well-being of the mother.

Abortion is one of many difficult ethical decisions today involving human judgment on the line between life and death: expensive medical treatments, organ transplants, birth control, and “death with dignity” initiatives. Capital punishment, or the death penalty, is also a topic of great debate in the larger context of what Chicago’s Cardinal Bernardin had framed as “a consistent ethic of life.” A 2005 statement from the U.S.. Conference of Catholic Bishops frames the issue of capital punishment in a way similar to that of the abortion debate: “Ending the death penalty would be one important step away from a culture of death and toward building a culture of life.”

There have been some efforts to find “common ground” between pro-life and pro-choice advocates. In a 1996 Christian Century article titled “Pro-life, Pro-Choice: Can We Talk?,” Frederica Mathewes-Green documents the Common Ground Network which began in Missouri in the late 1980s when Andrew Pudzer, a pro-life lawyer, and B.J. Isaacson-Jones, the head of one of the largest abortion clinics in St. Louis began to have conversations. The two “enemies” met privately face to face for several months before appearing together to discuss the issues on a local television show. While they had diametrically opposed views on abortion, they found that there was indeed much “common ground” between them. For example, they agreed that both sides should seek more aid for women below the poverty line and for their children, both born and unborn.

Those involved in these dialogues say the discovery of some overlapping areas of common commitment is important. Mathewes-Green described one such discovery at a dialogue in Washington D.C. “In one small group, an aggressive pro-choice lawyer was talking passionately about the protection of abused children. She spoke about children’s helplessness before their adult attackers. ‘They’re so small and vulnerable, and they have no one to defend them.’ A pro-lifer in the group said softly, ‘You know, that’s the reason a lot of people give for being pro-life.’” At the same time, those who participate in these efforts are often criticized for talking with the “enemy.” Mathewes-Green wrote about one pro-life leader who characterized the discussions as “seeking common ground with proponents of murder.”

Through the process of face-to face dialogue, each side is challenged in its stereotypes about what the other actually believes. Efforts to find common ground continue, as evidenced in the October 2012 broadcast of “Pro-Life, Pro-Choice, Pro-Dialogue,” a Civil Conversation Project event at the University of Minnesota hosted by Krista Tippett and the American Public Media program On Being. Dr. David Gushee, a Christian ethicist, and Frances Kissling, former president of Catholics for Choice, demonstrated the kind of nuanced conversation not heard in this often deeply polarized public discussion.